Along with Matt, the Timberwolves people in charge of their website also apparently have a mancrush on Blake.  After their game in Toronto, the Timberwolves main page on their website had the headline "Big Night in Bismarck for Ahearn, Wolves".  This wouldn't be a big deal, except the game in Bismarck isn't for another 3 days, and they'll be playing the Denver Nuggets, not the Raptors, as the accompanying caption mentioned.  They did beat the Raptors tonight 90-86, and Blake did do what he should be doing nightly, scoring 15 points in one quarter of action, before the other team realized that the dude can shoot.

I may do a bit of blogging at Sundays game, but if not, expect my thoughts here.  Hopefully the TWolves webguy won't have to change the page and I see Blake do it big, but theTimberwolves have basically, for some odd reason, been giving him everyother game off, and Bismarck would be his day to rest.  Click to continue and see the TWolves webpage.  Also, in the comments section, please leave a suggestion for a nickname for Blake.  I'll talk to him about it Saturday night.  Being in the NBA, he's going to need a nickname, and "The white dude that can shoot, has chest hairs coming out his jersey, and wears calf high socks" is a little too much for Scott Van Pelt to use on SportsCenter. 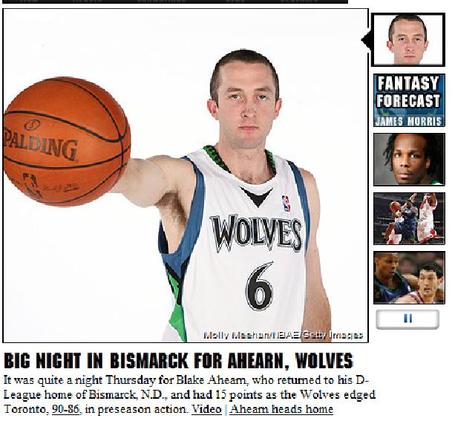