Gallinari and Ewing (Jr.) To Possibly Be Assigned To D-League

Share All sharing options for: Gallinari and Ewing (Jr.) To Possibly Be Assigned To D-League 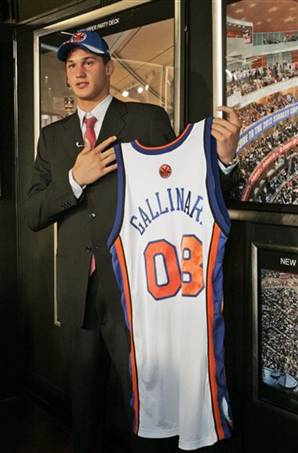 The Knicks Blog tips us off to a story that describes Mike D'Antoni discussing sending down Danilo Gallinari and Patrick Ewing Jr. to their D-League affiliate in Reno. From Newsday's Knicks Fix:

"Mike D'Antoni said the D-League was a possible destination for Danilo Gallinari, at the start of the season, if anything to get him extended minutes in game action to help him better prepare for his debut in the NBA lineup. The Knicks' affiliate in Reno is coached by Jay Humphries, who was on D'Antoni's staff in Phoenix and will run the D'Antoni system."

This would be huge for Reno, which was unlikely to get much attention this year from its other affiliate, Sacramento (regrettably). Sending down a pick that high would do huge for the league to show a major market team's coach having faith in the system. The Humphries-D'Antoni connection could pay huge dividends for Reno. This would equal the highest pick sent to the D-League on assignment, previously by the Blazers sending down Martell Webster in 2005.

As for Gallinari, this would be a good move for the youngster who has missed almost all of preseason with a back injury, including Summer League. Say what you want about the level of talent in the D versus Europe, it's the closest you're going to find in terms of speed and physicality, both of which Gallinari will need to develop if he's going to be succesful. Tucking him away for a season gets him away from the constant criticism and could allow him to get his confidence up.

Get ready, Bighorn fans. If this goes through, you've got a bright season ahead of you in your inaugural season.