We are about a week away from the D-League Draft, so we might as well start looking at some players that should be available to be drafted.  Looking at Summer League's, the Portsmouth Invite, NBA camp cuts, CBA draft picks, the NBA pre-draft camp in Orlando, and even the North American Basketball Classic, along with last years veterans and some helpful tips from agents, I've put together a database of about 250 players that currently aren't signed overseas, and thus, possible D-League Draft Picks.  Today, I'll start with looking at the rookies that could be available.  Since every team needs a rookie, this is probably the most crucial pick to get right.  Since he's a guy you have to carry for the season, might as well make him a good one.  Here are what I think are some of the better options (more of my thoughts may be coming), with all of the rookies that I could put together if you continue on.  Keep in mind that these guys are currently not signed, but with the recent cuts, could head overseas.

Mikheil Berishvili -- Berishvili.com.   That's all you really need to know about the kid.  Check out the videos, if that's not enough, come back and I'll let you know what else I know.  He's a 6-9 3/4 combo, kind of in an Ersan Ilyasova mold (2005 Bucks 2nd round pick).  He's also apparently working on getting better down low, but with the 3-point shot that he shows, he's already got a lot of potential.  He's played for the Georgia national team, and has never declared himself eligible for the draft, so, in essence, if he's as good in the D-League as he was overseas, he could be taken in the draft next season, a la Mike Taylor.

James Mays -- James was just cut by the Denver Nuggets, where he averaged 4.5 points and 3.5 boards.  With so many guaranteed contracts though, there wasn't really a spot for him.  I would expect for him to try his hand in the D-League this season, more than likely as an allocated guy to the 14ers.  He plays good defense, can rebound, and has a pretty high basketball IQ, as he moved well and slashed a lot when I saw him down in Vegas.  Though he seems to me a bit undersized, though extremely athletic, if he can put together some low post moves, he'd be an early call-up.

Malik Hairston -- Hairston is a pretty solid all-around player.  He doesn't too anything spectacular, but he does a lot of things good.  His shooting, as a 2-guard, is probably his biggest downfall from what I've seen.  He can play defense and rebound very well for his size, as he averaged 5 boards and a block this preseason with the Spurs.  Good decision to cut him, as he'll be assigned to Austin, and they can watch him and call him up when needed.  Seems like San Antonio is going to use the D-League to its complete potential.

Joe Crawford -- Crawford was drafted by the Lakers in the 2nd round, but was their last cut in pre-season.  Another savvy move by a D-League-team owning franchise.  Let him play for the D-Fenders, where he can work on rounding out his game, becoming more athletic, and bring him up when he can get playing time.

DeVon Hardin -- Hardin will probably play a role in the D-League like another former Cal grad, Rod Benson.  A 6'11 center, he's going to bring energy, rebounds, and a couple blocked shots a game.  As big and athletic as he is, he definitely has potential and the D-League would help him develop.

Steven Hill -- Hill is probably my favorite player coming out of this camp.  Is it just because I have an affinity for big awkward white guys with long hair and hustle and have named my personal website Schenschational in honor of this?  Possibly, but not only because of this.  I'd never heard of Hill until I saw him in Vegas with the Trailblazers.  He's a legit 7-footer that brings it on the defensive end.  He played his college ball at Arkansas, where over his 4 year career, he averaged 20 minutes, 4 points, 3 boards, and 2.5 blocks.  Not exactly amazing, but he's got the size and defense to develop into an NBA caliber backup, and for the Blazers to make him the last cut, I'm obviously not the only one thinking this.  If Sean Marks still has a job, Steven Hill should as well. 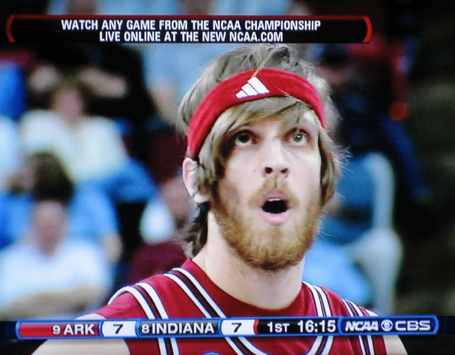 Here are some other Rookies that are currently unsigned, that I could think of.  Please contact me if you can think of any more.