Deane Martin -- Assistant Coach Of The Year So Far

Share All sharing options for: Deane Martin -- Assistant Coach Of The Year So Far 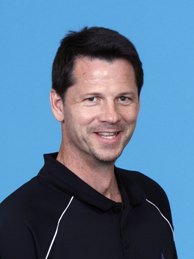 Tonight, after Scott Roth was ejected at the end of third quarter, none other than former Dakota Wizards assistant Deane Martin came in and saved the day!

Martin took over with the score 81-74, in favor of the Stampede, and the final turned out 107-102, in favor of the Jam.  In the 4th, the Jam scored 33 points, more than they had in any other quarter.  He took the momentum that came with Roth's ejection and ran with it all the way to his first D-League victory.  And ladies, according to his bio on the Bakersfield Jam's website, Martin is Single (with a capital 'S', apparently), and lives in Vegas during the offseason.  His only downside, he's helped develop Marcus Banks and Larry Hughes, and prefers plain wings (No sauce) when eating at Buffalo Wild Wings.  But, to overtake that, he doesn't look like this anymore: