Cartier Martin To The Bobcats

Share All sharing options for: Cartier Martin To The Bobcats

Cartier Martin to the NBA!  Iowa Energy have three D-League Call-Ups in the past NINE days!  Who's Cartier Martin!?

Cartier (Pronounced like the adult beverage) Martin was a four-year player at Kansas State who played last year in Turkey before being the 15th player picked in the D-League Draft this season.  Martin is a perimeter oriented forward who is VERY quick, and nothing really stands out as a weakness.  Martin is just a very solid player.  On the season, he's averaging 20 points and five boards, shooting 47% from the field, but he exploded last night against Ronald Dupree and Tulsa, with 31 points and 11 boards, including 4-for-8 from 3-point land.

Interestingly enough, this leaves the Iowa Energy with one more player that could eventually get an NBA look, to go along Martin, Anthony Tolliver, and Courtney Sims.  Othyus Jeffers, whose name is barely more unique than Cartier's, is averaging 19 points and nine rebounds, as, basically, a 6'5" power forward, that's learning the 2/3 slashing role. 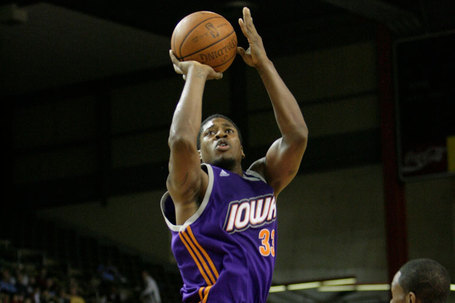