D-Leaguer's That Should Be Headed to Phoenix

Share All sharing options for: D-Leaguer's That Should Be Headed to Phoenix

Alright, today's the last chance to get your votes in for the D-League All-Star teams, but, since the D-League is about getting guys noticed, I figured I'd fill out my last ballot with guys that probably won't get a call-up, but should definitely be noticed outside of Sioux Falls, South Dakota and Des Moines, Iowa, among other places.  So, without further adieu, here are the guys I've noticed on the ballot that should get a little love, even if they're not quite on the NBA radar, starting with the forwards.

At the forward spot, I was allowed to pick four, and this was tough, as, for some reason, the D-League is loaded at the forward spot (Mostly due to not really having anyone listed as centers).

I went with the lovable Josh Davis, the 6'8 4/3/5 white guy for Colorado, currently averaging 17 points and six rebounds in about 30 minutes per game, flying pretty far under the radar even though he's only 28 and has played in 52 NBA games over three seasons.

My second spot goes to Will Frisby, who has been doing his thing with the Wizards the past two seasons without anyone really noticing.  Last year he was overshadowed by Kevin Lyde and Rod Benson, this year Richard Hendrix and Hamed Hadaddi have kind of stole his thunder.  Watching him as much as I have, he's a great complimentary player who is always working hard and doing the little things.  Occasionally, however, he decides to break out and do something like drop 29 points and grab 17 rebounds, which he did recently against Iowa.

My third spot will go to Nick Lewis.  As much as I don't like him (Stemming from a will-call incident with his family at a Dakota Wizards game last season), Nick Lewis probably deserves more appreciation than what he gets.  Lewis is currently averaging 16 points and 8 boards, starting all 24 games for the Bakersfield Jam.

My fourth pick would have to be Chris Hunter.  He's currently averaging 17.6 points and 10 boards per game, but for whatever reason, he doesn't seem to be getting too much love from anyone besides Ben Renz.  Plus, I didn't want to hate too much, as Garrett Martz of the Fort Wayne Mad Ants has started blogging, and it looks like he's going to bat if anyone has beef with the Mad Ants.  Fortunately, I only have beef with his wardrobe...

I also thought about including Too Much Rod Benson, as he's not even listed. 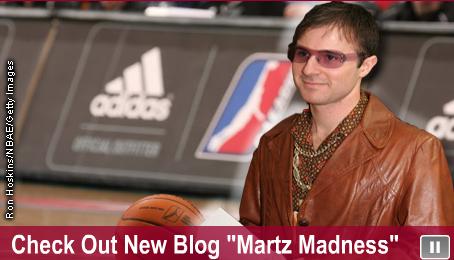 Check back later for my look at the guards that don't seem to be getting Too Much love.