Share All sharing options for: D-League All Star Game: Meet the Coach

The Iowa Energy have led the D-league most of this season and currently hold a 17-7 record. Coach Nurse gives credit to his players but also to the lessons learned in this second year of coaching the Energy.

Last year the team had a lot of player movement, some of which comes with the territory, but some that the team addressed this year by bringing in more experienced players and having a focus on keeping the team together.

Still, it is the D-league, and players will always be coming and going. As Nurse says, "One day you have one team and the next day you've got another. The first thing you do is accept that."

Understanding the unique challenges of coaching in a developmental league, Coach Nurse tries to keep things simple. Unlike at the pro level or even in college where you can work with a consistent group of players and build things over time, Nurse's approach limits the number of sets and defensive packages. This makes it easier for guys to come in with only a practice or two and pick things up. This extends even down to numbering and naming things in a simple way. 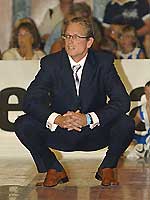 Unlike his all star counter part, Coach Quin Synder of the Austin Toros, the Iowa Energy are affiliated with two NBA teams - the Suns and the Bulls. Asked about the difference from the Toros (who are owned by the San Antonio Spurs) Coach Nurse talked about their advantage in bringing players.

Players and their agents feel that D-league teams with that kind of relationship provide a better opportunity for a call-up.

I was expecting to hear more about the consistency in systems when I asked this question. Coach Nurse spent some time with the Suns organization during their training camp so he could replicate some of their philosophy and I believe he did the same with the Bulls. While the Spurs have been playing the same kind of basketball for years, the Suns and Bulls are both teams in transition with new head coaches this season. Despite that, Coach Nurse has lead his team to the best record in the league and this opportunity to coach in Phoenix this week.

Coach Nurse is going into the all star game with focus and a game plan. Unlike at the NBA level, players in the D-league all star game realize they are being scouted, which makes this game much more of a legitimate competition.

His "Red Team" is made up with groups of players from the same team and Nurse plans to split them into two units that will play together. For example, the Energy's Sims and Martin would be partnered with Dakota's guards Ahearn and Baker and power forward Hendrix. The other unit has a front line from Idaho and an all-Bakersfield backcourt.

The two unit's will play 8 to 10 minutes each with the best unit or perhaps a combination playing the final portion of the game.

One thing for sure, this game will not be a "no defense" exhibition. I am looking forward to a hard fought competitive match up by guys hungry to prove themselves and perhaps impress the scouts that will in attendance.

For more information about the Iowa born and raised Nick Nurse you can visit his web site and read his full bio.