Fret not, Timberwolves faithful, the D-League is here to help.  Although losing Al Jefferson for the season hurts (like CanisHoopus commenter sgdtv said, "This feels a lot like when my dog jumps on my balls while I'm sleeping."), this season is not lost.  The best thing you can do, as this season almost certainly won't involve a post-season, is pick up a D-Leaguer (or two, your choice!) to develop, evaluating new talent for future seasons!

With this in mind, I've picked out five bigs from the D-League that won't disappoint! 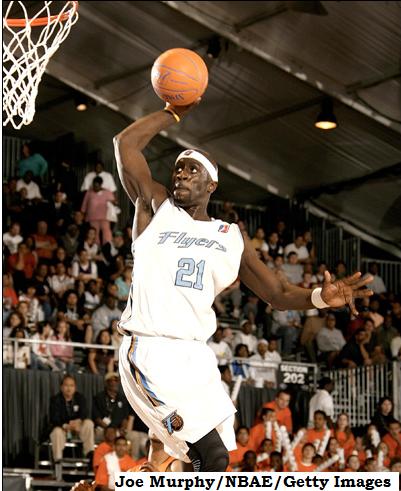 My first choice is going to be none other than Nana Papa Yaw Dwene Mensah-Bonsu, better known as Pops.  McHale should be familiar with him, as Pops played well on the Timberwolves Vegas Summer League team, scoring 21 points, grabbing eight boards, and swatting two shots in his best game at the VSL.  Defensively, Pops is probably tops in the D-League.  Challenging every shot, he's currently averaging over three blocks per game, however he is raw offensively, scoring most of his points off of offensive rebounds (averaging nearly five per game) and ferocious dunks.  Pops is currently dominating the D-League, averaging 25 points, 11.5 boards, over three blocks and two steals per game, shooting 63% from the floor.  His freakish athleticism alone is worth a call-up!  I don't know why you wouldn't want to take a look at Pops, but if you don't, don't worry, there's more where he came from!

Courtney Sims is a big I've been hyping all season, and with good reason.  The 6'11" Sims has great size, nice touch, solid athleticism, and he can create his own shot off the dribble.  Problem is, if you take away his left shoulder, he's not really shown he can do much else in the post, as he's just not really strong enough to back NBA-sized guys down.  He could also use some work defensively, as he's been getting backed down without putting up much of a fight.  Nonetheless, he's already had a 10-day with the Iowa Energy's affiliate, the Phoenix Suns, and is averaging two blocks a game, so he must be doing something right.  On the season, Sims is averaging 22 points and 11 boards, shooting 60% from the field.

My next option may not be as likely as he's only 6'8", but, as Sheed would say, ball don't lie.  Richard Hendrix, Golden State's second round pick this season, is a monster on the boards for the Dakota Wizards.  While Hendrix is not the most offensively polished big man, he makes an effort to grab every rebound while he's in the game (and is nearly succeeding, as his 11.6 rebounds per game is tops in the league).  His best game of the D-League season may have been Saturday, when he had 30 points, 14 rebounds, and three blocks, leading the Wizards to a big victory over division rival Fort Wayne.  For the season, he's averaging 14 points, 11.6 rebounds, and nearly two blocks per game.  As for why he didn't stick in Golden State?  My guess is Nellie didn't figure him to be in the Golden State Of Mind.

Next, I'll go back to a guy the Wolves are familiar with, as that's apparently what every team wants.  Dwayne Jones, the 6'10" defensive stopper currently with the Idaho Stampede, was signed as an undrafted free agent by the Wolves after helping lead St Joseph's to an undefeated season.  Jones never made it into a Wolves game that season though, as he was a piece of the trade brought Ricky Davis to the Twin Cities.  Jones has played in 74 NBA games over the past three seasons, showing one thing: The kid can play defense.  Offense is another story, but as of late, it's been serviceable, at least against D-League competition.  Over his past ten games, Jones is averaging 15.6 points and 11.4 rebounds, including a 31 point, 16 board gem last week against the Tulsa 66ers.

Lastly, I've got a bit of a wild card for you.  "Too Much" Rod Benson.   "Boom Tho".  "Yahoo's Finest".  Whatever you know him as, you should know that he can play.  Why would I include a guy currently averaging seven points, six boards, and a block per game?  Because, really, he should be in there like swimwear.  After playing in France to begin the season, he came back to a winning Dakota Wizards team, and Coach Duane Ticknor, stuck with what works, rather than inserting Benson into the starting lineup.  Need numbers to back my claim up?  Last season, in one game, he had 28 points and 28 rebounds, on his way to averaging 13 points and 12 boards per game.  Plus, with the way this year is going for the Timberwolves, and as my esteemed colleague Wyn pointed out, the marketing aspect is something the Wolves could use right now.  And, from looking at the fan pictures on his Boom Tho Movement facebook site, the fans in Minnesota are ready like spaghetti for him to join them.

UPDATE: The reason I didn't include Chris Richard is he has a broken bone in his back and is out for the season. 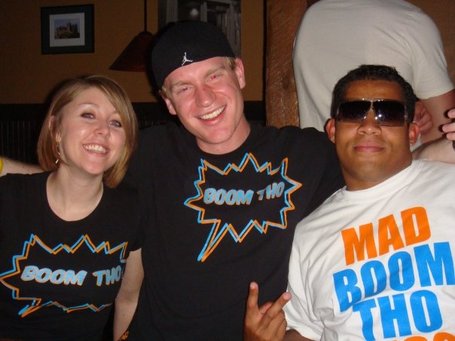