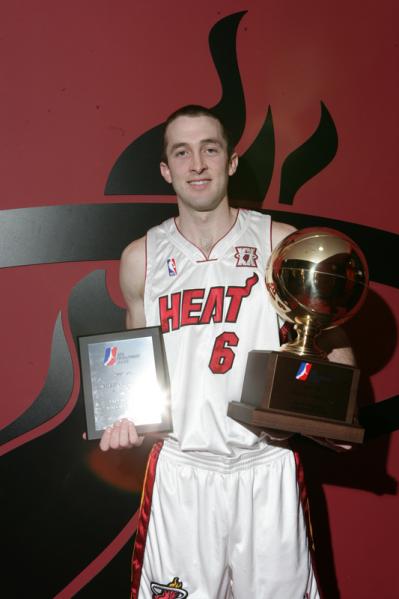 Blake's future's so bright you have to squint when you look at this picture.

The Jam ended up coming out on top in this matchup that easily could have gone either way for two very even teams (though, on paper Dakota should never lose a game). Bakersfield's Derrick Byars led the Jam with 31 points on a 13 for 20 night. I'm sure he'll wake up with a smile this morning along with Terrance Thomas (yay for alliteration!) who pulled down a ridiculous 18 rebounds, however Thomas' shot was off as he went just 3 for 11 from the field. Thanks to solid free-throw shooting all-around, the Jam won this as they were able to go 91% from the charity strike. Your fifth-grade coached harped on and on about it. Free throws win games. Also, Mateen Cleaves managed to sneak back onto the Jam without me even realizing he was back in the League. However, I'm not the most attentive guy either so who knows?

Blake Ahearn is a man and the rest of us are toddler boys who scream too much when we receive Christmas gifts. It's hard for me to understand how just having Ahearn, by himself, on your team doesn't automatically win you games. Who says basketball's a team sport? He shot 15 for 24 (inluding 5 of 9) from deep on his way to 41 points and also grabbed 8 rebounds on the night. Yes, his team still lost by eight, but it'd still be hard to feel bad with those numbers. There was no Renaldo Major in this one for the Wizards, which could definitely explain the Dakota loss as he contributes so much to this team. Richard Hendrix had 17 boards in just 29 minutes (Golden State is a joke of an organization). Too bad basketball is a team sport, right? Ahearn couldn't do it all for the Wizards as the rest of the team really stunk it up for Dakota offensively, and when Will Frisby is turning the ball over at a rate that could threaten the stability of many small countries, you will probably lose the game.