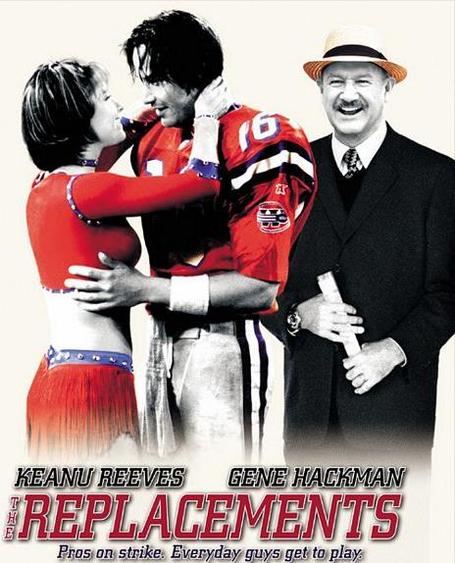 And they've made up some ground, but still are omitting Dontell Jefferson.  Unless someone gets called up from the Red Team, this will go down as the biggest traveshamockery the D-League has ever seen.

Yes, this includes the Martynas Andriuskevicius near-death experience, the Dakota Wizards recent waiving of Brad Stricker, the Austin waiver wire debacle of last season, the one day assignment of Darnell Jackson, Sean Williams D-League hatred, Marat Kogut, and the Fort Wayne radio announcers of last season... Yes, I just named everything I've ever not liked about the D-League.

Anyway, the first replacement guy is Erik Daniels (21 points, 10 boards) who is deserving, but not as a replacement for Chris Richard, because even though Daniels plays center for Erie, he doesn't match up well against the All-Star bigs on the Red Team, Courtney Sims and Lance Allred.  Daniels is basically Keanu Reeves, gets good gigs, and puts up good numbers, but you know, for some reason, it's not right.

Next up, we've got Marcus Williams, who was really robbed, taking the place of former Austin teammate Malik Hairston.  The Real Marcus Williams is averaging 21 points, seven rebounds, and over four assists per game.  Why he wasn't voted in initially kind of baffles me.  Marcus is going to be Gene Hackman, never been bad, ever, but occasionally makes bad decisions (Williams leaving early, Hackman voiced a character in Antz)!

The third pick is Othyus Jeffers, who is straight killing it this season.  Yes, killing it.  I'm not sure what it is/was, but it is no longer alive anymore.  He's got easily the best name in the D-League this year, possibly ever (Ansu Sesay anyone?), and is averaging 20 points and nine boards as an anywhere from 6'3-6'7 guard-forward.  He takes the place of former Iowa teammate Cartier Martin, who has been called-up by the Bobcats and is on his second 10-day.  Othyus (can I call him this?  Too informal?  Too formal?  Does he have a nickname?) is going to be the girl on the cover.  No idea what her name is, but I like her, and she came out of nowhere to surprise me.

There is one more possibility for a replacement, and that's if Trey Johnson gets his 10-day renewed by the Cavs.  If this happens, I'd like to say it's Dontell's spot, but they'd have to do some shuffling, as DJ's Utah teammate, Ronald Dupree, is on the Blue Team, while Johnson's on the Red Team.