Josh Davis: Call Him Up. K? Thanks!

Share All sharing options for: Josh Davis: Call Him Up. K? Thanks! 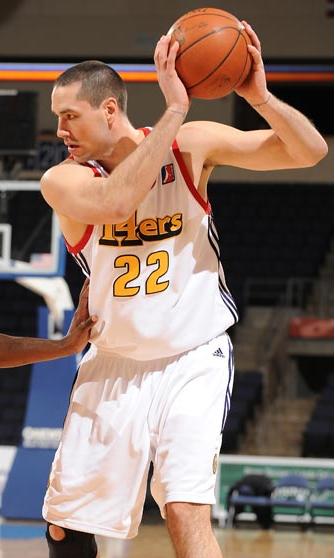 Dear Robert Sarver and anyone else making personnel decisions in the NBA,

My name is Ridiculous Scott, and I blog about the D-League.  Today, I would like to have your attention as I let you know about one of the best known unheralded NBA prospects currently in the D-League, Josh Davis.  Yes, that Josh Davis.  He's in the D-League now.  Yep, the 6'8" forward from Wyoming who has NBA experience, appearing in 52 games, including six starts, with a myriad of teams.  Take notice. (Especially you, Mr. Sarver.  You have to sign a player by Friday.  Josh Davis and Lou Amundson on the same team?  Might as well rename Phoenix HUSTLE POINTS CITY!!)

Josh, my man, has played hard every game this season, doing the little things, playing "blue collar" if you will, while averaging 19 points and seven rebounds, being the glue guy for the Colorado 14ers.  He's also shooting 48% from the field, over 35% from 3-point territory, 90% from the charity stripe (4th in the D-League), so there's not a problem there either.

While he's been fine taking a backseat to NBA guys like James Mays, Sean Williams, Cheikh Samb, Eddie Gill, and Sonny Weems so far this season, the 14ers needed him tonight, and he delivered.  Big Time!  Davis had 38 points, 25 in the second half, in just 27 minutes of playing time.  He also added nine rebounds, two steals, a block, and three 3's, just for good measure.

Davis, you might remember, has played in Italy, Chicago, Idaho, Atlanta, Spain, Minnesota, Orlando, Philadelphia, Milwaukee, Houston, Phoenix, Vegas, Russia, Ukraine, Indiana, and now Colorado.  He's got experience.  I know you like experience.  In fact, he's got so much experience, he once told a reporter, "I've pretty much played in every league you can play in on the face of the Earth."  That's pretty much true.

Why hasn't he stuck? I'm not sure.  His per 36 minutes averages while in the NBA are pretty good: 12.5 points, 8.6 rebounds.  He's picked up accolades in the CBA (MVP, Newcomer of the Year, 1st Team All-CBA) and was twice All-MWC at Wyoming.  He's currently headed to Phoenix to play in the D-League All-Star Game.

His skills are pretty much immeasurable, however.  He's not extremely athletic, or even really athletic, or even anything more than averagely athletic, but more often than not, he'll have more hustle in him than any other player on the court -- Combined.  He's smart, moves well without the ball, and can stroke the long ball with the best of them (and by them, I mean everyone, but specifically 6'8" white forwards that hustle a lot).

His D-League coach Bob MacKinnon, who was recently an NBA scout for the Lakers, really likes him game, as he's been quoted as saying "A lot of it is timing... he doesn't have to do anything but keep playing the way he's playing. It's just a matter of opportunities and of staying ready."  MacKinnon went on to say "I look on the rosters of NBA teams, and you can't tell me he's not better than half the people in the NBA."

Tonight, once again, after the game, MacKinnon gushed over Davis even more: "He got open shots because he moved without the ball and ran the court... he's so easy to coach because everything that you try to do he soaks in like a sponge. It's a joy to watch a guy go out and do what you ask him to do."

I'll leave you with a quote from Josh: "If God wants me to play in the NBA, then I'll be playing in the NBA.... If He wants me to learn something down here, then that's what I'm going to do. He's given me incredible ability to play this game of basketball. It's my job to do that to the best of my ability no matter where I'm at."

Call Him Up.  He deserves it.