Also, no, Meeking is not a 3-point shooter.  Every once in awhile they pop in the box score, but if he thinks his 3-point game is going to get in the NBA, we've got issues.

One last thing. Antonio Meeking went 5 for 6 from three point range. Since he's 270lbs (at least) and 6'7" I had to ask him about this part of the game.

At the risk of making a fool out of myself since I really don't know anything about his game and was too stupid too look up his numbers BEFORE I asked, I asked him if that was a normal part of a his game or a all star thing.

Well, for the record he said it is a part of his normal game and something he's been working on. He's about 30% from three this season and 17% for his career.

Since I don't cover the D-league like Scott does I have no idea if things like this are normal. If 270lb forwards shooting three IS normal then there's really no reason no to move to Reno or Bismarck or where ever just to see that. 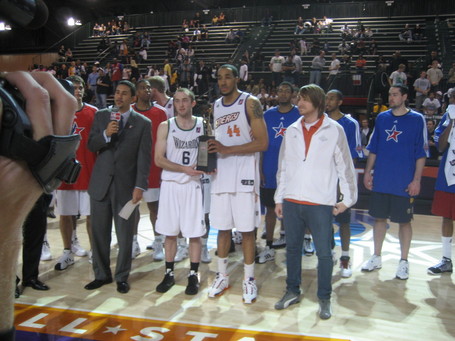 Coach Nurse attributed the win to increased intensity in transition D in the second half.  He thought Sims 4 blocks were huge and a part of his game that he's going to need to show more at the next level when he doesn't need to worry about getting into foul trouble and playing big minutes.

Ahearn showed his all around game with 13 assists and a series of three's that broke the game open.

More on the game later.

MVP goes to...not sure yet.

The answer is NO. There is NO GARBAGE TIME in the d-league when guys are playing for a contract every night out.

Petway just sky'd for a put back jam. Too bad he didn't stay down and just grab the rebound and make the easy play

and Petway finally gets to show off w/ a dunk

Make that 3 three's for Meeking. What up with that!

Nice pump fake by Lance to get two guys in the air and slip under for the easy lay in. I bet LeBron taught him that last year.

Is this garbage time?

Hey Amare. Did you see that hustle right there by Richard Hendrix? Just asking.

Can someone please get me a bottle of water?

No. I guess I am not Craig Sager after all.

There are a lot of tall men around. Expected. Problem comes when they stand in front of me.

The rather large Meeking just missed a 3. I am guessing that's not the best available shot. I could be wrong on that. I don't know his game. But I am guess shooting 3's isn't it. Can I get an amen on that?

Here in an RU exclusive I can report that the Dancing Dads only can dance choreographed moves. I have that from a solid reliable source within the Dads.

Way to make me eat those words. Petway with a turn around fading J.

Good half time adjustment from Nurse to slow it down and limit the TO's.

Meeking just LEVELED Trey Johnson. At least I think that's who's body I saw laying in a puddle.

Dancing Dads bringing the house down!

Crowd is nice btw. Full stands and into the game.

Oooh, but you are not going to out run James White for a loose ball. Not.Going. To. Happen.

Byars? Why don't I know these guys? Oh, right. It is impossible to watch D-league games on TV.

I have yet to see Brent Petway do anything impressive. Well, beyond work the crowd that is. He does have showman game.

Ahearn taking it over w/ 13pts and 10 assists. He is AUTOMATIC from down town. It's a real shame he's not actually the 6-2 they list him as.

2nd half starting back up...btw from NBA D-league twitter:

If you missed the All-Star Game, it'll be replayed on NBATV at 9pm (ET) or watch it online with NBA FutureCast! http://www.nba.com/dleague/

Blake had 8 assists in the 1st half btw. Failed to mention that.

Red team comes out of the locker room strong. Seems like they are trying to get the pace under control.

Ahearn w/ a three. Of course. His release is fairly quick. He's a smaller Ray Allen.

Blue Team led by 8 each from Conroy and Hunter.

Blue leads 51 - 43 at the half with the defensive play by the Blue guards and their faster player over coming the Red size advantage.

Half time fun? Mascots chucking balls in the general direction of the basket. The Warriors Blue Man Dude has got some game...he's also dealing with a lot less fur.

Blake's got more handle then I was expecting.

Walker Russel who the Suns worked out a few months ago looks sharp as well. He's a slighter build then Conroy. More of a slippery little point guard.

These guys are really playing their asses off. No one is walking the dog around here...

Walker Russel with an amazing behind the back then right up into his shooting motion! Holy cow! Its that how Mad Ants always roll?

The back court duo of Conroy and Walker really controlling this game.

Nurse is pissed as his team's D gets lax and gives up a back door alley oop.

Suns Golden Grannies on the court entertaining their own way

In that last stretch the Blue got 4 points off 4 turnovers. Nice pressure from Walker Russell.

Antonio is a big boy. Like Craig Smith big.

Sims hits a nice three from the top of the arc. Nothing but net. I hope he gets some playing time for the Suns just to see what he's got.

Nurse subbed his A unit back in at that last break while Snyder also went a bit deeper on the bench.

A lot of full court pressure in this game has lead to quite a few turnovers for both teams.

Lance Allred led the Red Team in that second internal with 7 points.

Snyder's blue team on had one sub so far in the 1st period. Bozeman in for Dupree.

James White is fearless. Kind of reminds me of JR Smith. In both ways you might imagine.

Per his plan. Nurse subs out his entire starting 5 for the 2nd unit while Snyder leaves in his big guns Conroy and White.

Two very different approaches to this game from the coaches.

Red has the advantage when the game slows with their size up front (Sims and Hendrix) while Blue is pushing the ball w/ White and Conroy.

Conroy w/ 8 pts for Blue and Jeffers with 8 for Red. Jeffers been hitting some nice mid range stuff and got to the rim a couple of times.

As I write that Jeffers hits a quick two.

Conroy drives the lane, absorbs the contact and finishes for an and 1. He's got a little bit of Jameer Nelson in him.

Nurse up pacing the sideline while Snyder looking cool and composed. Stress cool.

This game is getting fun. Fast paced and solid passing. White just hit Davis for an oop and Ahern shows he's not just a 3 pt shooter w/ a bucket in the lane.

Holler up people if you are out there!

Red Team is in their home whites. Blue team in with the pretty colors.

This isn't the best angel to watch the game btw. Not complaining. Just saying.

Tip off. James White shows that he's got range as well as big up's as he hits a three. Conroy for 2 makes is a quick 5-2 game.

I just realized that the score board is literally directly over my head. Awkward.

I am sitting baseline while the team's warm up. I just spent a few minutes with Blue Team Coach Quin Snyder talking about the Toro's and a bit about this game. Quin's a sharp looking dude. Think grizzled old coach and then do a 180.

I will work on the audio and writing that up later. My fault, but we spent most of our time talking about general stuff and I only got a little bit into this game with him. His basic approach is to keep it simple.

Having talked to Coach Nurse earlier in the week and again last night I can tell you he's got a few more wringles thrown in.

Stay tuned on this channel for some wicked live blogging. I will do my best to match the effort and passion of the boys in Red and Blue on the court. PLEASE do chime in with your comments below. I hate talking to myself.