Where Are We Living Now?

Share All sharing options for: Where Are We Living Now? 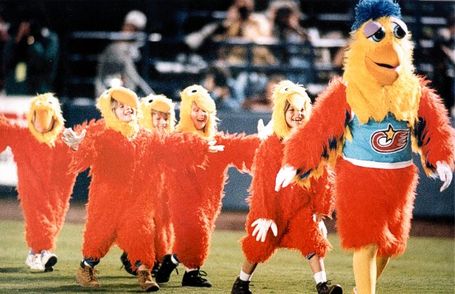 Well hey hey D-League fans! It was a fun, fun All-Star weekend that saw Daequan Cook taking home the NBA 3-Point Shootout title (former D-Leaguer!), Dwight Howard stealing Keith Clark's side of the board dunk, Will Conroy winning one of the most boring events in the history of the game, Blake Ahearn and Courtney Sims ever-so deservingly taking home co-MVP honors at the All-Star game (the NBA copied us again and chose two MVPs as well), and James White proving that he would easily win the NBA Dunk contest as well. Needless to say, it was a good one.

But all that fun is over. And the rest of the season will be absolutely zero fun here on out. The Erie Bayhawks have won five straight and I doubt they plan on breaking that streak any time soon so the rest of the league better be looking out for that. Austin and Colorado are on top of the League, both with their pretty 19-8 records leaving the rest of the fellas in the Southwest Division without a prayer. And let's not forget that Idaho has lost four straight. Ah, I bet they're missing Coby Karl about now (hell, I'm missing Coby Karl right now). Courtney Sims is back in Phoenix. No surprise here, but we'll see what happens to Iowa as their lineup starting the season looks much different than the lineup they're using now. Me? I'm betting they'll be just fine.

As for Iowa, we'll get a look at them in just a couple of hours, as they have a terribly timed game today agains the Mad Ants at 1 PM. I want to say the Ants can pull off a win here, but let's be honest for a sec; they probably won't. Did I mention they cut Shawn Hawkins? Who I, a few weeks ago, claimed to be the most talented all-around player on that team? Either I don't know basketball (which is definitely possible) or Shawn was a grumpy gus. I bet Hawkins' is a pleasant guy though. So I must not know this game. If you're still reading this, you can stop now. I know very little about this game.

Next up we have Austin taking on Anaheim, and any baby enjoying Skittles could tell you the winner of this one. The game time was moved up to 3 PM because of President's Day. I don't understand this move, thus making it the second, and final game of the day that I do not get to watch because of the ridiculous (the bad way) time. Also, the Famous Chicken may or may not be there. Also, James White should try to do a free-throw line dunk during game action. Over Pops Menshah-Bonsu. How impressed would we all be then?