Just to let everyone know, I'm going to live blog the game between the Austin Toros and Anaheim Arsenal in about 45 minutes.

Why?  Because it's featuring, as of right now, the two most buzzed about D-Leaguer's in Pops Mensah-Bonsu for Austin and James "Flight" White for the Arsenal.

I'm predicting Austin, and Pops, dominates, but I'll be posting my thoughts throughout the game, so check back once in awhile.

And if you get the chance, participate.  You can watch the game free online and since it features a couple of possible call-ups, they might be playing for your team, tomorrow!

Alright, Pops, your phone should be ringing right now.  Run back to the locker room, answer it, say you'll be in that city tomorrow, and continue playing.  You've got a 13 point lead.  Quin won't mind.

If no NBA GM has called Pops tonight, there's something wrong.  He's got 26 points, 16 rebounds, and two blocks THROUGH THREE QUARTERS.  PLAYING ONLY 36 MINUTES.

Why is this Chicken famous?

Regardless, he's promised to sign every one an autograph after the game.  Wish I was there.

James White got it swung to him and guess what! He shot. Good thing is, he made it.

Pops has six points, five boards, and now only one turnover.  Closer to four however.

Nancy Lieberman is in the box score. Seriously. 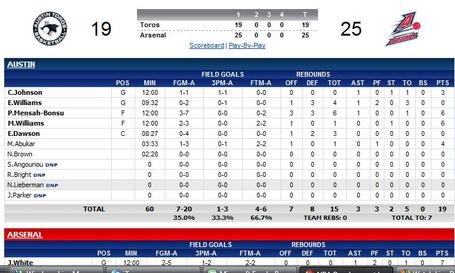 We've got some dueling banjos for timeout music -- OH! And Piano!

The Famous Chicken does not impress me.

As predicted, Pops and Marcus have combined for all of Austin's points so far.

All five starters have scored for Anaheim.

James White is not allergic to shooting.

Pops with a 3-second call.  This is not good.

Mo Abukar has a nice name. and stroked a LONG 2.

Ezra Williams should not shoot the ball. Ever.

Wonder if anyone, ever, will read this?

Cedric Bozeman is good at defense.

Pops with a steal on the rebound and the effortless flush.

Pops has post moves.  And he only finishes with dunks.  This is not a bad thing.

Mensah-Bonsu tried a tomahawk from a ways out, but bounced off the back of the rim.

Pops gets another attempt, but Kedrick Brown meets him at the rim and rejects it.

Austin released Carldell "Squeaky" Johnson due to injury recently.  He's starting.  Not noted in the transactions as having returned, however.

Marcus Campbell matched up on Pops.  Could be good!

Pops with an alley-oop on the other end -- He should've been in the dunk contest.

Mensah-Bonsu trying to do work in the post, but travels -- Gotta work on that footwork big fella!

Not giving Pops anything easy -- Just got hammered while going up in the post -- Two shots.

Wow! Introduction by David Stern (via pre-recorded commercial that seems to be meant for the first game of the season)

I hate the D-League commercials.

James White can juggle the basketball... with his feet.  Incorporate THAT into a dunk.

Remember Kedrick Brown?  My how the mighty have fallen.

Anaheim, I think we need some new music.

I don't think the fans got notice that this is an early game. Yikes!

No audio yet, but The Famous Chicken is here!!