Updated:  I posted this Saturday night.  Today, it's become official.  The wonderful Joanna Shapiro just sent out a press release. 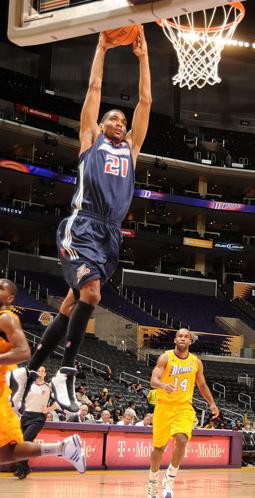 Last week,  we voted him as most likely to be called-up, and it seems his time has arrived.  James "Flight" White, the 6'7" swingman out of Cincinatti, who was playing with the Anaheim Arsenal of the D-League, has been called-up by the Houston Rockets, taking the place of recently waived Luther Head.  In the D-League, White was averaging 26 points and five rebounds, shooting 55% from the field.  He was also this years D-League dunk champ.

White, who was the only player in the D-League to have an NBA championship ring (with San Antonio his rookie seasn), is an explosive athlete who has been shooting the ball wel this season.  White was formerly known for an attitude problem, but by all accounts, that's been mostly fixed.  He can get to the rim and 'D' up, thanks to his long arms and ridiculous athleticism.  His shot's consistency isn't quite what it should be, but with his athleticism, I think he can still come off the bench in the NBA and do what's needed, as he won't be relied upon to score the 26 points he's averaging in the D-League.

In an interview he recently said "Everybody thinks I have a bad attitude or I'm a bad guy because I show emotion. But that's what fuels me to play, my emotion."  Well, I like the emotion and his attitude, by all accounts, seem to have improved tremendously over the past two years.

He was able to do this in high school:

Also, he can also still do this: