Not Without a Fight

Share All sharing options for: Not Without a Fight 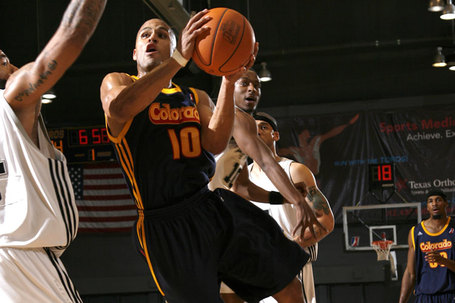 Ah, this is the type of game that all basketball fans live for. Solid performances from two of the top teams in the league and a "oh- please-three-ball, go-in-so-my-team-can-win-this-game-and-I-can-look-good-to-NBA-franchises-who-are-recently-in-need-of-a-solid-big-man-with-NBA-experience, just-go-in, please, I-never-do-anything-wrong." Both teams kept it pretty even, though 39 turnoevers split evenly between the two? Come on fellas! I can forgive this though. Austin had two great individual performances by Pops Mensah-Bonsu (who missed a trey at the buzzer that would have won it - but this cannot be blamed on him; great game for Pops) and Marcus Williams. Williams had a game on par with Courney Sims' monster season debut. 30 points, 13 boards, 9 assists, 2 steals, and 2 blocks for good measure. Just missed the trouble-double but the two good blocks are easily worth 7 assists (roughly). Pops put in 31, grabbed 8 rebounds, and swatted three shots. These guys are great. Austin is solid. Gotta have my Pops.

The real story here is Colorado. These guys just flat out brought it tonight. Eddie Gill was my MVP for the team with his 18 points and 12 dimes (I love good passers; they are priceless) but Josh Davis put up a ridiculous performance (in his attempt to silence the naysayers - proving he deserves that All-Star spot) with 23 points, 11 boards, and 3 steals (5 for 7 behind the arc). Joe Dabbert was ejected in the 4th after his second tech, but in his 29 minutes he put in 23 points, 8 rebounds, and robbed it 3 times. Great game between these two powerhouses and you expect to see this matchup in the playoffs.

Erie's got their swagger back. Idaho...not so much. Their 17 turnovers just added to the gift of letting Erie shoot 56% on the night, just handing Erie their third straight win. Erie's Erik Daniels had a game on par with Williams, putting up his own ALMOST trip-dub with 26 points, 12 rebounds, 9 dimes and 2 steals. I cannot understand why this guy isn't an All-Star (don't I say this too much? Hell, I should be an All-Star - put me in the dunk contest; I'll take everyone out with a solid lay up where I may or may not get one foot off the ground). No Erie player is represented. Daniels puts up numbers like these consistently and is one of the best overall players in the league. Talk about a snub. Also for Erie, Maureece Rice looked great with 22 points and six boards not to mention Ivan Harris' nice 15 points and 9 rebounds. Great overall game by Erie. Put Oliver Lafayette in here and any of these four Erie guys could hold their own against any All-Star this year.

Can't say the same about Idaho (the good game thing - not the All-Star thing; this team has some solid talent as well). No player was in the game for more than 29 minutes and everyone had around 20 minutes of playing time. I don't really understand what Bryan Gates was trying to do here. I can see him wanting to give solid playing time to everybody on the team, but what about winning games? I understand he's been doing things like this all season but when you're down 26 points at the end of 48 you've done something wrong (I'll blame it on only playing Luke Jackson for 26 minutes). Kevin Burleson (who? THIS GUY) came off the bench and looked nice for Idaho however, with 17 points and 5 assists in his own 28 minutes. Dwayne Jones snagged 8 boards in the loss. What an odd way to lose...

Will Conroy and Dontell Jefferson were named co-Players of the Month, and this is one decision I agree with 100%. Both have been great for their respective teams, and Jefferson not being an All-Star (like I said yesterday) is a travesty. Also, little Willie should be getting a call-up pretty soon. I can feel it. What a great scorer. This Thursday night we've got three games, my favorite of which is the Sioux Falls - Dakota matchup. This is a rivalry and always a good one, but I'm gonna go with Dakota on this one. I don't understand how they even lose a single game with that stacked roster. Hope everyone has a Thursday on par with Erik Daniels. I'm sure he's feeling pretty good about himself. Erie fans need to vote more next year. But that goes without saying. Sound off with your favorite All-Star snub this year in the comments!