Will Conroy. Call Him Up. Thanks A Bunch!

Share All sharing options for: Will Conroy. Call Him Up. Thanks A Bunch! 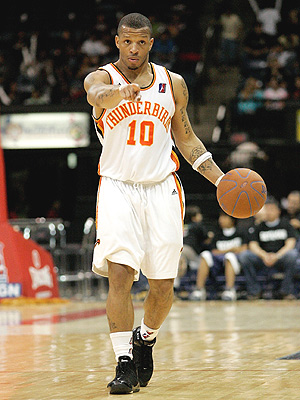 Conroy Wants YOU to Call Him Up!

Alright, in an ongoing campaign to get the D-League name out, I've focused a couple paragraphs on guys that should get called-up.  Today, my focus is going to get a little more narrow, as we're going to focus on the hottest (not looks-wise, as we all know Luke Schenscher will never lose that title) player in the D-League.

Will Conroy, the 6'2", 195 pound guard out of Washington, is having a heckuva season in his fourth season a pro.  This season, he's averaging 26 points, eight assists, and over four rebounds per game, shooting 49% from the field and 36% from 3-point territory.  Typically, if you're putting up numbers like that, someone will look at you in the NBA.  Unfortunately, for whatever reason, Conroy is still in the D-League.

However, if we look at Conroy's numbers a bit closer, ever since there's been a need for a point guard in the NBA, his numbers have been even better!  Over his past six games, Conroy has averaged 32 points, nine assists, and four rebounds, along with cutting one less turnover out of his game.  Over these six games, he's played an average of 47 minutes per game, shooting 53% from the field and 40% from 3-point land.  3-point % seems a bit off, but when you've taken 42 3-point shots over six games, and have made them at a 40% clip, something is going right!

Let's look at the downside of Will, coming out of college.  They said he was a poor shooter, but over the past four seasons in the D-League, he's improved every season, becoming one of the best long range shooter's currently in the D-League this season.

They said he turns the ball over too much.  While he's still turning the ball over, it's getting better.  The hardest part for him is probably that Albuquerque doesn't have a good inside presence with great basketball IQ.  If he was in the NBA, he wouldn't have this problem and one or two of his turnovers wouldn't happen each game (majority of his turnovers come on the entry pass).  Also, when you're playing 47 minutes a game at the point, it'd be ridiculous not to turn the ball over.

He doesn't play defense.  Well, last game, he held Reno Bighorns point guard Majic Dorsey to nine points, one assist and three turnovers on 4-for-10 shooting.  The game before that, he held his closest equal, Dakota's Maurice Baker, to a 3-for-12 shooting night, with five assists and two turnovers.  Must be improving in the defensive aspect as well.

To summarize, please call this man up.  The Magic should have instead of trading for Tyronn Lue, but lucky for the Bucks fans, he's still out there for the taking to shore up the point now that Luke Ridnour is out.  If the Bucks decide to pass for some reason though,  I've heard that the Suns might bring him in for a look when they need to sign another guy to a 10-day contract.