First, in regards to yesterday's call-up rankings, I wouldn't switch it up.  Josh Davis is top 5.  Derrick Byars is good and will probably get a look, but not before my next rankings (which could come soon with the new talent coming into the D-League).  Eddie Gill, Walker Russell and Mateen Cleaves all would have made it had been a top 15, or top five best point guards.  Unfortunately, to include five point guards in a 10 player list would be tough to do.  Leave your justificiations in the comments, and if I believe you, they'll make it in next time.  I was proud of my last list, as all four call-ups were in my top six.  Can't find that accuracy anywhere else!

Next, I'm working on the top 10 worst all-time futurecast moments.  Caught two Futurecasts yesterday and the first, Iowa at Albuquerque, gave me a top three.  In the second half, Albuquerque's radio announcers phone started ringing, loudly.  Not good.  So obviously, to make it stop ringing, he answered it.  Obviously.  He was having trouble hearing this person while announcing, so the first minute or two of the conversation was "Hello?  Who is this?  Yes, this is him.  Who is this?  Hello?  Hold on, I'm doing a broadcast."  However, when a player went to the freethrow line, it got good, as we finally found out who was on the phone: "Hello?  Who is this? Mary?! Mary from where?!  Ohhhhhhhh, MARY!"  I peed a little.  Easily the most awkward phone conversation I've not-purposely eavesdropped on involving a radio guy and a woman named Mary.  Scott Woodmansee would never do this.  Chad Andrus would never do this.  Not even the great Alejandro Del Barrio would do this.  Regardless, you stay classy, Albuquerque.  Let me know if you have any favorites.

To stick with the Albuquerque webcast, they announced a crowd of 4,593 and the radio guy continually said it was "nearly sold out."  This was not the case, unless there were 4,192 people that left in the first quarter, which I didn't watch.  I had a screen-capture to show about 300 empty seats as the radio guy announced the near capacity crowd (apparently oblivious anyone was watching), but unfortunately didn't save it.  To show a near capacity crowd, or at least a great crowd, here's a picture of the Wizards game Sunday, which had to have been much more accurate with their reported crowd of 4,351.  Observe two different sides of the arena: 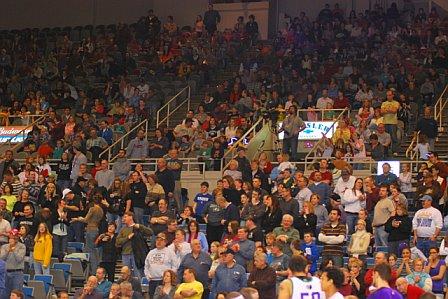 Last, let's look at the big performances in the D-League last night.

Courtney Sims went off with 25 points, 15 boards, and five blocks.  Very impressive numbers, but against inferior competition.  He had four inches and a lot more athletic ability than anybody that Albuquerque could defend him with, save for RU's favorite, Brad Stricker.  Stricker played just 19 minutes, however.

Will Conroy had his best game I've watched in a long time. 24 points, 10 assists, just one turnover.  Was aggressive in getting to the rim as usual, made a couple easy passes to the open man to rack up the assists, and didn't frustrate me all that much, believe it or not.

Fort Wayne had three players turn in worthy performances, and needed all three, as coach Jaren Jackson barely played anyone else.  Chris Hunter had 29 points and 12 boards (really increased the scoring as of late), Ron Howard had 28 points, and Walker Russell, despite five turnovers, finished with a triple-double with 19 points, 11 assists, 10 rebounds and seven steals.  Wow. Back to back triple-double's and a victory.  He'll move up in the next rankings.

Austin was led by Marcus Williams, who went off for 34 points, 10 assists, and eight rebounds, shooting 14-of-24 from the field.  Need a point-forward with potential?  Found him.  Dwayne Jones also made a huge contribution, albeit in a losing effort.  I overlooked him in the call-up rankings, at least as an honorable mention, as it seems to me he has been underperforming.  Jon L, however, had him ranked, and for good reason, as he had 23 points and 16 boards.  This is what I expect from the big fella.

Colorado embarassed Rio Grande Valley, and thus, didn't really have anyone that stood out.  Dominating a team 147-119, the whole team should probably get the recognition, as it's tough to score 49 points in the fourth quarter without attributing it to a team effort.

Jawad Williams, as expected, was the lone bright spot for Rio Grande Valley.  He had 29 points on 8-of-16 shooting.  Here's a shoutout to Kurt Looby as well.  I like him.  He had 10 points and 12 boards, and was held without a block.  No blocks is what surprises me, as he had 5, 6, and 5 over the past three games.

Trey Johnson led a team effort as Bakersfield defeated Reno 101-96, with 22 points on 8-of-17 shooting.  Nick Lewis had 18 points, 10 boards, and Justin Reed, who I don't think I've mentioned on RU in quite awhile had a decent all around game, scoring 14 points to go with eight boards, eight assists.

Reno was led by Patrick Ewing Jr., which should be good news for all the PEJr lovers on RU, if there's any left.  He had 19 points, 14 boards, three blocks, and is really playing well since being promoted to starter.  David Noel played well, scoring 11 points, dishing 10 assists, and narrowly missing a triple-double with nine rebounds.  Too Much Rod Benson is averaging 3.3 blocks off the bench since the trade.