D-League Upset of the Season?

Share All sharing options for: D-League Upset of the Season?

Yet no one was there to see it.  In the always lovely random afternoon game on a huge day of sports viewing (Kansas lost, FYI), the Tulsa 66ers bettered their W-L record to 8-29, defeating the 22-15 Iowa Energy 108-107 in overtime.

Leading the way for Tulsa was Gary Forbes with 25 points, 10 boards, and seven turnovers.  Herbert Hill came off the bench to contribute 19 points, 10 bards, and five blocks, playing the majority of the game after Keith Clark left early with an eye injury.  Shaun Livingston missed all six of his shot attempts, but finished with 11 assists.

For Iowa, I'll give it up for Curtis Stinson.  I don't know how he does it, but today he had 17 points, 16 assists, six boards, and just four turnovers, despite playing all 53 minutes.  Courtney Sims had 23 points, 14 boards, and five turnovers, and Othyus Jeffers had 19 points, 13 boards, and a big steal in overtime to give Iowa the ball and a chance to win the game.  Iowa has now lost three of their past four games, two in overtime.

They announced a crowd of 1,809.  Here's a screenshot.  According to bluejayrock: Judging by the Futurecast feed, there are tens of people at the game in Tulsa! 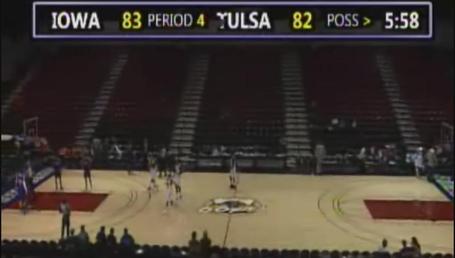