Jean-Paul Afif may be one of the top young undiscovered coaching talents in the country. Jean-Paul signed a preseason contract with the Sacramento Kings; in 2002, but was released before the season.  He was also drafted in the NBDL that same season; also with stints overseas in Italy, Lebanon, and Turkey. Though he excelled as a player, he might be an even better coach.

Jean-Paul was named an ABA All-Star Head Coach during the 2007-2008 season when he lead the Texas Tycoons to a 21-3 overall record. What is amazing is that during that very same season, he stepped in as Head Coach and General Manager of the Dallas PBL. Inheriting a team that was 2-9, Jean-Paul turned around Dallas and finished on a 7-3 run and winning a playoff berth! As if that's not impressive enough, this was done while simultaneously coaching the Tycoons to a banner season. The Tycoons finished the season 21-3 and were ABA finalists. 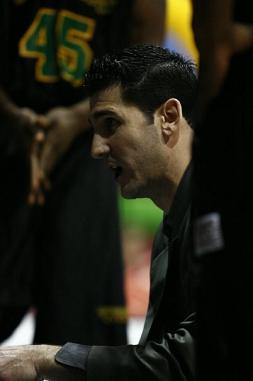 Jean-Paul was forced to work with depleted rosters on both teams. In order to fill them out, Jean-Paul went to local YMCAs and gyms in the Dallas area and signed local players. Of the 8 that he signed from around the city, all 8 were picked in this years D-League draft! He hand-picked 8 amateur players out of local gyms and turned every single one of them into D-League draftees - simply amazing. The list of players scouted, developed and coached by Jean-Paul in 2007-2008 include:

Jean-Paul's eye for talent is in one word... incredible. To find players with almost no pro-basketball experience and turn them into D-League draft talent is an incredible feat that is a testament to Jean-Paul's capabilities. Not only does he have an eye for finding talented players, but he's also an expert at getting these players to realize that talent. Jean-Paul advocates a team strategy that focuses on a strong defense, but despite this, his offenses find ways to put points on the board in bunches. This past season with the Texas Tycoons, Jean-Paul's squad had 5 or more players averaging double digits in scoring under his "run and gun" offense.

With only a few years of coaching experience under his belt, Jean-Paul's accomplishments in such little time have been unprecedented. Having already ascended to the helm of an ABA program, the sky is the limit for Jean-Paul. Speaking about one of Jean-Paul's teams, ESPN's Chris Munson says, "This is a team that can run, and Jean-Paul will be an NBA coach one day." He hasn't been on the coaching scene long, but his skills are immediately evident to anyone that watches him in action. Jean-Paul is an expert at recognizing and developing talent, but also he blends these qualities with an uncanny ability to win basketball games...the true mark of an excellent coach. Without a doubt Jean-Paul will continue to impress as he works his way up the coaching ranks.