Share All sharing options for: Blake Ahearn is Better than You - Last Night In The D-League

Big news in Wizards world last night, as Blake Ahearn broke the career record for 3-pointer's made with 202 in just 75 games so far with Dakota.  Considering next year is the 15th season of basketball, this is pretty cool.  Congrats Blake! 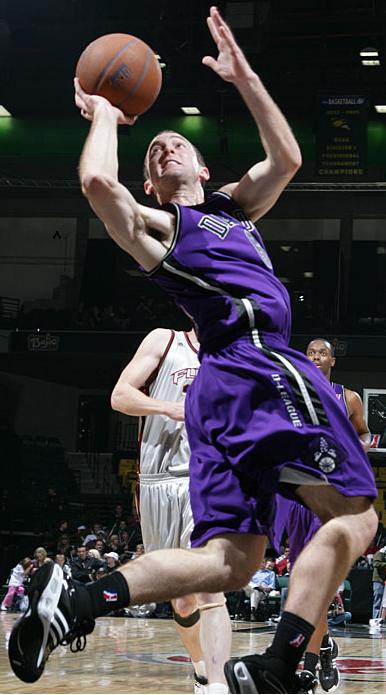 Kinda like Marat Kogut and his magic, Ahearn can twist his body while shooting!

Continue on for highlights, lowlights and anything else I noticed in last nights D-League games!  With five games, there was a lot!

Dakota's best player, as we've already touched on, was Blake Ahearn.  Not much I can say about Ahearn that everyone hasn't heard, so we'll just get to his line.  In 40 minutees, he scored 35 points on 16 shots, hitting seven of his 10 3-point attempts.  Blake Ahearn is a man.  He's got the chest hair to prove it.

Other notables for Dakota include Mo Baker, who finished with 20 points, 10 boards and six assists from the point guard spot.  This was Baker's seventh game this season with double-digit rebounds, and he's a 6'1" guard.  Romel Beck, while starting to look like a black hole on offense, did have a clutch 3-pointer, so I've got to give him props on that.  He finished with 15 points.  Usually a Wizard big man would be in this space at all, but unfortunately, this game was officiated by Ben Taylor and Nick Buchert, who are fast becoming the worst refs in the D-League Congrats Marat.  Still the D-League has them work together every game I see them.  Dear D-League, please put a stop to this.  For the good of D-League basketball.

Erie was led by Maureece Rice, who has been a man on a mission lately.  His mission, apparently, has been making Erie win games, as they came in winning nine of their last ten.  This game, Rice had 24 at the half, and somehow was open for every shot attempt.  While I predicted a shootout between Ahearn and Quincy Douby, Rice really stole the show for Erie.  Rice finished this game with 36 points, nine assists, and just one turnover.  Great game from the rookie.

Other notables for Erie included Douby, who made his Erie debut.  In 16 minutes off the bench, he had 16 points, jawed with Ahearn to the point where I figured they'd get double-technicals, and thoroughly impressed me with his defense.  Possibly this years version of Dahntay Jones?  According to Matt Brennan (I know - I'm popular), probably.  Erik Daniels was a bit of a non-factor, scoring 17 points and grabbing just five boards.  Not used to that.  Nor am I used to the fact that he started the game guarding Ahearn.  Awkward!

WTLC liveblogged this one, so I'm going to direct you over there.  I've got nothing to include that they didn't, save for the fact that this was mentioned in the comments: "A 66er girl had a wardrobe malfunction…a la Janet Jackson."  Plenty of pictures over there, but none of this.  Sorry fellas.

This game wasn't futurecasted.  Second night in a row that a game wasn't.  First night was when Carmelo Anthony was going to do play-by-play at a 14ers game.  Tonight, when Sun Yue was playing, the most marketable D-Leaguer worldwide.  This is, as they say, not really good at all.

Stud for Idaho was Lance Allred.  Wow.  I don't have any analysis on this since I couldn't watch any of it, so here's his line: 29 points, 5 boards, 30 minutes.

Other notables for Idaho were Kevin Burleson with 14 points and 10 assists and Jason Ellis off the bench with 11 points and 15 boards.  Nate Jawai had 15 points and nine boards before fouling out in 27 minutes.  Needless to say, he has to calm that down a bit.  Regardless, Idaho is 4-1 with Jawai in the lineup, Toronto is 0-6 with Jawai in the D-League.  Coincidence?  They doubt it.

Los Angeles was led by Dwayne Mitchell with 34 points.  I have a feeling this team has chemistry issues.  As per no futurecast, I have no other outlook on his stats.

Other notables for LA were Brandon Heath with 20 points, six boards, and five assists.  Sun Yue is terrible.  Case closed.  I will not listen to any arguments.  We've given him three games.  He is not the guy I thought was coming over.  This game, he had seven points, shooting 3-for-10 from the field.

I didn't watch the majority of this game either, due to my frustration with the above.  I'm really glad it's tournament time!  Locally and nationally!

For Utah, as I assumed, Mo Almond beasted.  This line shouldn't surprise you - 29 minutes, 29 points, 10-of-14 from the field.  Unless he has a bad attitude, I can't understand why Utah wouldn't want to bring him back next year.

It seems Utah was pretty much a one man show, so I'll just mention Utah coach Brad Jones' rotation in this spot: Jones suited up eleven guys and ten played more than a quarter of action.  Kevin Kruger had the most minutes, but still under 36.

Bakersfield was led by Trey Johnson.  Johnson went off as usual, scoring 28 points on 16 shots.  NBA teams, call him up. K? Thanks! Bye!

Nothing else too notable for Bakersfield, so we'll go with a former March Madness star: Mateen Cleaves had six points, six assists, and four turnovers.  Not quite his Michigan State numbers. 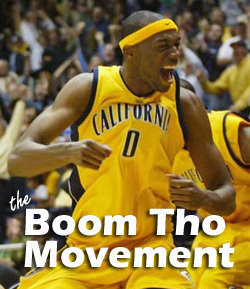 The Boom Tho Movement is once again, well, a movement.  After becoming stagnant overseas and then in Dakota, it appears Rod Benson, AKA Boom Tho, has found his mojo in Reno.  Coming off the bench in 32 minutes, Benson scored 30 points (possibly a career high?  Rod, let me know), grabbed seven boards, and swatted three shots.  Since getting to Reno fives games ago, Benson is averaging 14.2 points, 6.2 boards, and THREE POINT SIX blocks per game, all off the bench.  I like this.

Benson got the opportunity to go off due to a knee injury to Patrick Ewing Jr (Sorry Chris).  The announcers speculated everything from a torn ACL to a knee sprain.  I'll get the official report this morning.  Ewing finished with 19 points in 22 minutes.  Russell Robinson played well, even though his Kansas Jayhawks aren't, much to the chagrin of some D-League GM's.  Robinson had 20 points, shooting 8-for-15 from the field.  David Noel also had a solid game with 19 points, eight boards and eight assists.

Sioux Falls was led by Frank Williams, so R-Rob probably wasn't that great on the defensive end.  Williams finished 31 points, two assists and five turnovers.  Ouch.  This just in: don't leave him open.

Other notables include David Bailey, who was injured mid-game, got blocked by Benson on Sioux Falls second to last possession, and then dribbled the ball off his foot as time expired.  He finished with 11 points and six boards in 24 minutes.  The Charlotte Bobcats assignees played well, although in limited minutes.  Sean Singletary finished with 12 points and seven assists in 23 minutes and Alexis Ajinca had 12 points and six boards in 22 minutes.  Bobby Jones was relegated to starting the game in the bench.  I'd move Michael Joiner or one of the point guards to the bench instead.