Bigger is better; random thoughts on last night in the D-League

Share All sharing options for: Bigger is better; random thoughts on last night in the D-League

Three games Saturday night (in the D-League), all very close, all with different outcomes than I expected.  Plus, I watched Jason Horner and the Mandan Braves win the North Dakota High School championship instead of the buffering madness that has recently been D-League basketball.  Yikes!  I may no longer be the D-League guru! 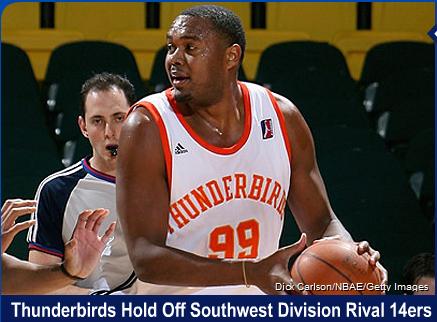 Continue reading for my breakdown of the individual games!

This is the most surprising game of the night.  Albuquerque trotted out a lineup I loathe, featuring Jasper Johnson and Antonio Meeking, each with body dimensions very similar to mine (read: not tall enough, too wide, and not ideal for the NBA), big ol' Brad Stricker, Will Conroy, and Antoine Agudio, some dude I've never heard of.

Standing out for the Thunderbirds was Agudio, who, upon further research, is the all-time leading scorer from Hofstra, which boasts such luminaries as Speedy Claxton and Norm Richardson!  Agudio is a lights out shooter (Blake Ahearn-esque) that's recently been given an opportunity since Keith McLeod went down with an unknown injury three games ago.  Since that injury, Agudio's killing it.  Tonight was no different, as he finished with 23 points on 11 shots and had five steals.  As a bonus, his name is fun to say.

Other notables for the Thunderbirds were Will Conroy, who had 27 points, eight assists, and seven turnovers (OUCH!), making 7-of-16 from the field.  Jasper Johnson, who I'm not sold on, had 17 points, nine boards, five assists, and four blocks.  Antonio Meeking had a similar line with 16 points and nine boards.

Standing out for Colorado was Trey Gilder.  Gilder is the opposite of the Johnson-Meeking tandem in that he's tall enough to play power forward in the NBA, but weighs in at about 180 pounds, and that's only after Thanksgiving, Christmas, and Super Bowl Sunday.  Obviously, this means he's much quicker than those that matched up with him, and was able to get a couple nice putback dunks, moving well to the basket.  The draft-eligible Gilder (I'm changing his name to that so everyone knows) had 19 points and 12 boards in 24 minutes of action.

Other standouts for Colorado included the the point guard tandem of Eddie Gill, who had 19 points and eight assists, and John Lucas, who finished with 17 points off the bench, along with Josh Davis, who finished with 13 points, grabbed six boards, and dished four assists in just 32 minutes of action.  Sonny Weems box score didn't impress me, as he scored 13 points and grabbed four boards, his least impressive performance with the 14ers since he's been assigned.

I'm waiting for Rumble to come on and tell me that at 1:35 of this video, Jawad Williams was clearly out of bounds.  I hate to question the D-League officials, but it seems to me that he was out of bounds.  To put it in perspective, that was in overtime, and ended up being the game winning shot.  Ugh.

RGV was led by their shooting from the 3-point line.  When a team can shoot 28 3's and be nearly 50%, they're probably going to win.  Trent Strickland also stood out for RGV.  Strickland, who I rarely mention because I'm not all that familiar with him, is a third year player out of Wake Forest.  When he's hot, he's hot, and when he's not, you definitely know that he's not.  Strickland has started all 39 games for RGV this season, averaging 18 points and six boards, shooting just 33% from deep.

Other notables for RGV were Jawad Williams with 22 points and six boards, shooting 5-for-9 from beyond the arc (just 7-for-23 overall though) and Jared Jordan, who had 15 points and 13 assists while committing just one turnover in 40 minutes of playing time!

Idaho was led by The Big Aristotle (he's that smart - more deserving than Shaq) Lance Allred, who finished with 27 points and 12 boards in 30 minutes of action.  While I didn't watch tonight, he's also been showing off a nice shooting touch from about 17 feet.  This can only help his shot at the show (or a huge overseas contract).

Other notables for Idaho include Nate Jawai with 14 points, 10 boards, and four fouls in 26 minutes, Brent Petway with 10 points, 10 baords, and six blocks (four of Williams , as I had assumed in preview), and Mo Abukar off the bench with 16 points and nine boards in 23 minutes.

Got nothing on this game.  Utah won.  Mo Almond had 26.  Sioux Falls lost.  Sean Singletary came off the bench with 23 points.  Alexis Ajinca looked terrible - seven points four boards, fouled out in under 18 minutes.  Frank Williams had 23 as well.  According to Dee-Jay, Kyrylo Fesenko drinks Red Bull before the game and Almond wears his socks inside out.  Now you know!