Share All sharing options for: Rod Benson, now with Reno, can score, drive a nice car. Plus, D-League Results from Selection Sunday!

Yesterday there were five games in the D-League, all with their own random results, some not anything indicative of D-League.com's Matthew Brennan (we'll get to that in a post soon)!

The biggest news, however, came out of Reno.  No, not that Cezary Trybanski is back in the league (huge news though? Yes).  Bigger than that!  No, not that preliminary reports are that Patrick Ewing Jr. just ended up with a strained ACL (FYI, his Georgetown Hoyas drew a six seed in the used-to-be-prestigous-but now-definitely-isn't NIT).  Bigger than that, even.  No, not even that Rod Benson has remembered how to score.  Getting warmer! Benson bought a new car!  Thanks to his shrewd negotiating, Boom Tho is now rolling around Reno in a 2006 Mercedes-Benz CLS55 AMG that was listed at for over double what his D-League salary will be this season.  Do I know what all those numbers and letters mean?  No.  Do I know that if he's able to buy a Mercedes and play in the D-League simultaneously, that all players should go overseas until Christmas time and come back loaded?  Yes.  Here's a picture: 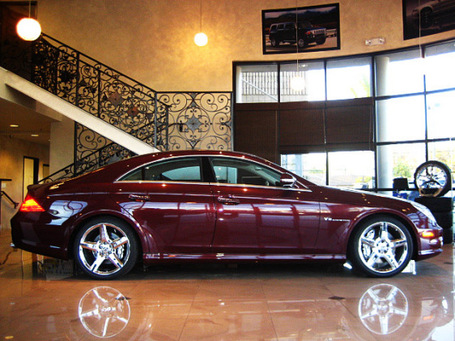 Continue on for coverage of all the games last night in the D-League. Who's hot, Who's not, Who's who?

Also, if you've got connections, and I know most of you do, to arrange a way for me to get a couple tickets for the Minneapolis Regional of the NCAA's, let me know.

Iowa was led by Othyus Jeffers, who is quickly becoming my favorite player in the D-League.  He's aggressive, he's got swagger, he locks down on defense, and he rebounds amazingly well for a 6'5" player.  I'd put his position (2?3?4?), but I'm not sure what it is.  He's basically a 6'5" slashing power forward that guards the opposition's best player under 6'9".  Since the beginning of February, Jeffers is averaging 21.5 points, 9.5 boards, 3.5 assists, and 2.3 steals, shooting 51% from the field.  This game, however, against one of the hottest teams in the D-League, he stepped his game up one more notch.  Jeffers notched 28 points and 11 boards this game, leading his team to the victory.

The Erie Bayhawks were led by Erik Daniels.  Ugh.  22 points, 20 boards, 8-of-26 from the field.  I just have not got close to falling in love with his game yet.  I apologize.  His defense is nothing to write home about, his 45% shooting playing the low post is gross, and in this game, he had 10 offensive rebounds.  Five were off his own misses.  Not sure if he was pulling a Ricky Davis to get up to 20 boards and increase those statistics, but he'll have to show he can play as a 3 and defend much better before those numbers impress NBA GM's.

Other notable players for the Bayhawks were Maureece Rice, who scored 17 points, dished six assists, and grabbed five boards; Ivan Harris, who scored 14 points and shot 4-for-10 from 3; and Quincy Douby, who should soon be inserted into the starting lineup.  While I'm not sure there's enough shots to go around for him, he's a great scorer (at least at this level), scoring 14 points in 19 minutes yesterday afternoon.

Gary Forbes led the way for Tulsa.  This should have been happening nightly.  Unfortunately, it just started recently.  Forbes was traded to Tulsa earlier this season, presumably so that Oklahoma City could get a better look at one of the better D-League prospects.  Only recently has the rookie out of UMass blossomed, though.  He ocassionally plays the point, has furthered his range, and can get to the rim with ease (Not LeBron James easy, more with Blake Ahearn awkward-ease).  Over his last five games, he's averaging 22.4 points, 7.8 boards, and 4.8 assists.  I'd have to get WelcomeToLoudCity's opinion, but I don't think it's all that far-fetched to take a look at Forbes, and soon.  This game, he had 26 points, six boards, and four assists.

Other notables for Tulsa include Herbert Hill (former Sixer), who had a monster 18 points, 17 boards, and three blocks; and Shaun Livingston, who didn't play great, scoring eight points and grabbing five boards.

Albuquerque was led by Antoine Agudio.  Since I profiled Agudio over the weekend, I'll use that same info today.  Enjoy! Agudio is the all-time leading scorer from Hofstra, which boasts such luminaries as Speedy Claxton and Norm Richardson!  Agudio is a lights out shooter (Blake Ahearn-esque) that's recently been given an opportunity since Keith McLeod went down with an unknown injury three four games ago.  Since that injury, Agudio's killing it.  Tonight was no different, as he finished with 23 points on 11 shots and had five steals 30 points on 15 shots, six-of-8 from beyond the arc, five boards, four assists and two steasl.  As a bonus, his name is fun to say.

The other notable Thunderbird was Will Conroy.  While he also finished with 30 points, it took him 12 more shots from the field and an extra six from the free-throw line compared to Agudio.  He did add eight boards and seven assists, for positives.

Dakota wasn't really led.  Kind of a team effort, with no one really standing out.  No clue how they won.  Fort Wayne crumbled multiple times.  For a Wizards standout, I'll go with Richard Hendrix.  Really, he never stood out other  than a minute and a half stretch when Fort Wayne decided it was a smart idea to put Anthony (Who?) Kent on him, but he did finish with 17 points and 10 boards, so we'll give it to the big man.  Hendrix is battling a leg injury, but played alright in 27 minutes this game.  On the season, he's averaging 13.9 points, 11.5 boards, and 1.6 blocks, shooting 55% from the field and just 60% from the free-throw line.

Other notables for Dakota include Mo Baker with 16 points, eight boards, and six assists (but five turnovers); and David Bell with 18 points and six boards (plus he drove and didn't turn it over every time. Bonus!).

Fort Wayne was led by Taj McCullough.  After Renaldo Major went to the bench with a back injury early in the game, Dakota didn't really have anyone to guard him, as they either went with three guards (none of which could guard the 6'7" McCullough) or Romel Beck (who is a black hole on offense and not impressive on defense).  McCullough did put up good numbers, as he should have, scoring 24 points on 10-of-15 shooting and grabbing four steals.

Reno was led by "Too Much" Rod Benson.  I got confirmation from Mike Offerdahl, Wizards PR guru (Reno doesn't read RU or what!?), that Benson's 30 points last game (For fun,read this recap via Reno here) were a career high.  Too Much followed that performance up with something nearly as impressive, scoring 25 points and grabbing seven boards last night.  Benson apparently just needed to get back to the west coast to re-blossom, as he's averaging 16 points, 6.3 boards, and 3.2 blocks in 29 minutes, starting his first game last night.

Other notables for Reno include David Noel who scored 22 points; Richie Frahm with 19 points and 5-of-9 shooting from beyond the arc; and Lamar Butler (who?) with 21 points, five-of-six from deep, off the bench.

Anaheim was led by Cedric Bozeman, who scored 24 points, grabbed five boards, and dished seven assists, but then countered them with five turnovers.  On the season, the former Hawk is averaging 18 points, 6.8 boards, and 3.8 assists, shooting 30% from beyond the arc (that % is bad, FYI).

Other notables for Anaheim include Ronald Allen with 21 points and Cameron Bennerman (Who?) with 17 points off the bench.

Los Angeles was led by Ryan Forehan-Kelly, who wins tonights Who of the Night!  Forehan-Kelly is one of those random help-out players the D-League gave to LA to begin the season, after trying out for LA.  This doesn't seem fair to me, as he should have already been on the D-League radar, having been in the draft last season.  Regardless, Forehan-Kelly came out firing off the bench, scoring 24 points on 9-of-12 shooting and grabbing nine boards.  RFK's season averages are a little more modest - 10.4 points and 3.9 boards.

Nobody else had great games for LA, yet they were somehow able to go on a 15-0 run in the second quarter.  Joe Crawford had 16 points on 6-of-16 shooting; Dwayne Mitchell came out hot, scoring 10 points in the first stanza (enough to make me email 14ers Mr. Everything Chad Andrus to tell him to "suit up, stop him from putting his head down and driving left"), but Mitchell finished with just 13 points and nine boards, clearly fearful of Andrus defensive prowess.  Sun Yue, the most overhyped player ever to be assisgned to the D-League (including Martynas Andriuskevicius) got dunked on twice, hard.  Sonny Weems once, Trey Gilder the other time.  I loved it.  He also contributed 11 points, six boards, and four assists, shooting 4-of-12 from the field.  Dear LA, bring him back up.  I think the over-promotion of him is hurting him.

The 14ers were led by Dominique Coleman according to the box score, but his numbers, minus the six big steals, came very quietly.  Thus, I don't have much for anecdotes of him this game.  He finished with 20 points, eight boards, five assists, and four turnovers.

Other notables for Colorado include Josh Davis, who seemed to be the only player on the court for the majority of the game, finishing with 19 points and and six boards and Sonny Weems, who scored 16 points in 17 minutes.  Eddie Gill stunk it up, shooting 1-for-8 from the field, finishing with four points, six assists, and four turnovers, including a terrible decision on a shot in the last minute of action.