Sun Yue heading back to the Lakers after disappointing stint

Share All sharing options for: Sun Yue heading back to the Lakers after disappointing stint 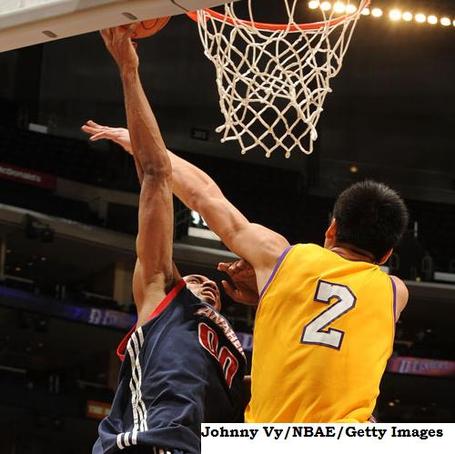 Sun Yue getting dunked on by Cedric Bozeman

Sun Yue, who struggled mightily in the D-League, has been recalled today, and according to the LA Times, he deserves an A for effort.  This might be true, but I don't think he deserves any playing time in the NBA.

In four games in the D-League, the Chinese Magic Johnson didn't impress.  Honestly, I'm shocked that he was drafted by the Lakers, as in the three games I saw him play, it looked he belonged back in the ABA with his Chinese traveling team, the Beijing Aoshen.

The Aoshen, AKA Aoshen Olympian, play in the ABA, which, in it's current state, is not exactly a good league.  Ever heard of the PBL?  It's way below that.  IBL?  Probably even a bit below that.  The ABA is disgusting.  Same with Yue's game.

How he continues to be a part of an NBA roster, and get hyped as much as he does, is a disservice to the D-Leaguer's.  Guys in the D-League are working hard to make the NBA, get their names out their, and doing everything they need to do to achieve their dream of the NBA.  Not that Sun Yue doesn't have a worthwhile dream, he most certainly does, it just doesn't seem fair that he's marketed as much as he was in the D-League when there are so many candidates that deserve the extra name drops.

Yue, while in the D-League, will be most remembered for being dunked on by Sonny Weems.  His stats certainly weren't memorable.  In four games on a team that includes that's won just 14 of their 40 games, he couldn't stand out.  He averaged 10.3 points, 3.5 assists, and 3.5 boards in over 36 minutes a game in the D-League.  Really, he was trying too, or at least getting shots up.  He shot just 36% from the field and just 60% from the free-throw line.

Bottom line, if Sun Yue can be drafted that high in the second round, I fully expect to either see him released this Summer or see current D-Leaguer's Trey Gilder and Keith Clark get drafted.