NBA-Ready D-League Players? We got em!

Share All sharing options for: NBA-Ready D-League Players? We got em!

With NBA teams either gearing up for the playoffs or the draft, it's time to take a closer look at the D-League and see what it has to offer to both the have's and have not's!

What!? Why would I do one of these after I just released one last Tuesday?  Because, since then, Patrick Ewing Jr. worked his way on to the list, (then quickly off with an ACL injury that led to his release (details coming)), Rod Benson turned into a scoring, shot swatting, Boom Tho-ing machine, and Demarcus Nelson, Mouhamed Sene, Herbert Hill, Quincy Douby, and the immortal Cezary Trybanski have all entered the D-League.  With them, Shaun Livingston, Earl Barron, and Dwayne Jones have also showed they can still play basketball, thus garnering some attention.

The list above includes three first round picks, a second round pick, a player with an NBA championship, the reigning D-League Performer of the Week and two guys that would do wonderful in a remake of Twins - Demarcus Nelson and Cezary Trybanski!

With that, here are my new and improved call-up rankings, now cooler thanks to an idea I've stolen from DraftExpress's Jim Hlavac (he's much cooler than we said he was last week, FYI!

I got the idea to do this thanks to Atma Brother ONE of the GoldenStateOfMind crew - Richard Hendrix, Rod Benson, Demarcus Nelson - Golden State's well represented on this list!

To explain, the "Quick Fix" is going to be the guy your team should call-up if you're still in contention.  He's more than likely a vet, he'll know his role, and should be able to step in when needed and grasp the system quickly.  He probably won't have the upside to keep around for next season, however.  Think Billy Thomas with Cleveland last year.

The "Prospect" is a guy that a team more than likely out of contention would call-up.  While he's probably not going to help out immediately, he's definitely got Ridiculous Upside and would be worth signing, at least so you're guaranteed a longer look at Summer League.  Think Blake Ahearn/Kasib Powell/Stephane Lasme with Miami last year.

Quick Fix: Eddie Gill, Colorado - While he's already been through a couple of 10-day's with Milwaukee this season, Gill is the savvy veteran that will be able to be a stop-gap back-up point for a contending team.  Gill is averaging 15.6 points and 8.3 assists in 27 D-League games this season. 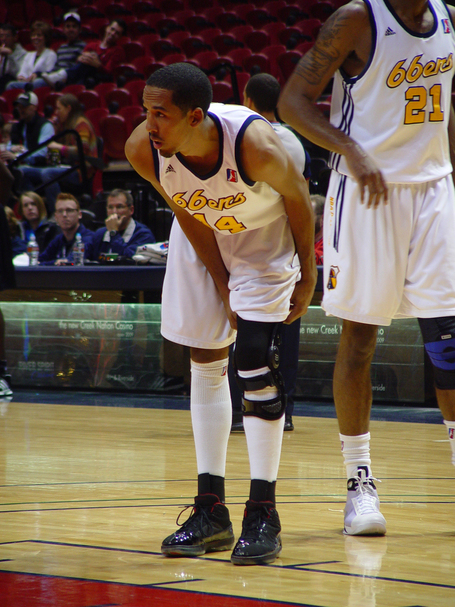 Prospect: Shaun Livingston, Tulsa - While Livingston's probably shouldn't really be considered a prospect still (fourth overall pick in 2004), he's still recovering from a serious knee injury, wearing a large brace on his knee (more pictures here).  Regardless, he's got too much ridiculous upside, and should definitely get called-up before the end of the season to a team that might be in the market for a young point guard (Might I suggest Tulsa's owners, OKC?).  Livingston is averaging just seven points and seven assists in four starts, but the 9-30 Tulsa 66ers are 2-2 in those games, with obvious improvements with Livingston on the floor.

Quick Fix: Quincy Douby, Erie - While Douby could also be considered a prospect, I have no doubt that if your team needs an athletic scorer off the bench, Douby could step in and heat up off the bench rather quickly.  As I've mentioned before, he could be this years version of Dahntay Jones (got cut by NBA team, pit stop in the D-League, back to the NBA).  In two games off the bench with the Bayhawks, Douby is averaging 15 points in 18 minutes, shooting 45% from the field.

Prospect: Trey Johnson, Bakersfield - Johnson's had two call-ups with Cleveland this season, but didn't get any burn.  The versatile Johnson has gotten quite a few looks throughout his short career, and I expect he'll get at least one more this season.  The 6'6" 2/1/3 is averaging 20.8 points and 4.7 assists, shooting 46% from the field.

Quick Fix: David Noel, Reno - Noel has a season of NBA experience with the Bucks, good overseas experience, and played four years at North Carolina.  What's not to like about him?  He's a glue guy and would fit well into any role given to him in the NBA.  This D-League season, he's playing very well on the defensive end (averages 2.3 steals) and is 50% from the field and 39% from beyond the arc.  Noel's also averaging 5.9 rebounds and 4.3 assists. Bonus: he's got long term potential as well!

Prospect: Derrick Byars, Bakersfield - Byars, who was a stud his senior year at Vandy, was drafted by the Blazers in the second round but went overseas and hasn't had a shot at the NBA yet.  Don't worry, worriers, his shot will come this season.  He's got a great NBA body (6'7", 215) a sweet shooting stroke (48% from the field, 44% from 3) and all the physical tools needed to be a good NBA defender.

Quick Fix: Josh Davis, Colorado - I like Josh.  My mancrush is well known.  Really, though, what's not to like about him.  He can shoot the 3-ball, he can board, he brings his lunchpail (Love it!), and he can D-up.  Consummate glue guy.  Not much upside, but you know what you're getting.  He's gritty.  Davis is averaging 18.9 points and 7.6 boards in 33 minutes, holding together one of the top teams in the D-League. 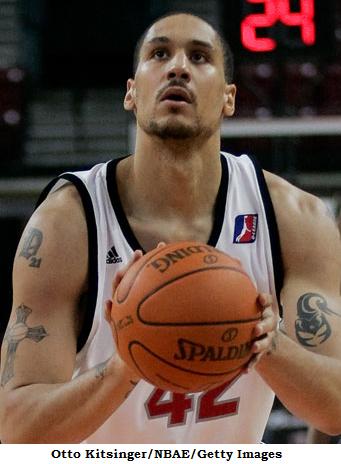 Quick Fix: Dwayne Jones, Austin - If you're looking for defense and rebounding, which is what a quick fix would be called upon to do in most situations, I'm going to throw Mr. Jones at you.  Jones has played in the NBA (Boston, Cleveland, Charlotte), was the A-10 Defensive Player of the Year, and is the reigning D-League Player of the Week.  In the last week, Jones played four games, averaging 20.8 points and 16.5 boards.  Not bad. Not bad at all.

Prospect: Richard Hendrix, Dakota - Hendrix is a beast.  He's barely 22, he's built like a linebacker, he's smart (graduated in three years at 'Bama), and he was a second round pick this season.  For some reason, however, he just can't get a look!  This season, averaging just 30 minutes, he's averaging 13.9 points and 11.5 boards per game, shooting 55% from the field.  He's also been improving on his range, which is random, but a bonus - he's made 4-of-9 from beyond the arc!