Guess What? Sun Yue is on Futurecast tonight!

Share All sharing options for: Guess What? Sun Yue is on Futurecast tonight! 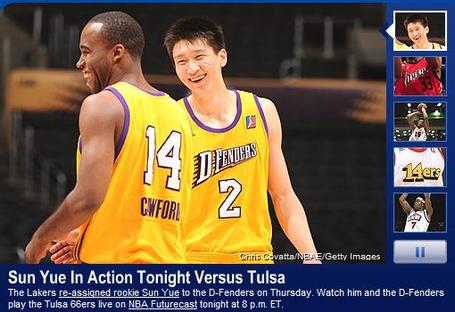 I know.  If you could do anything at 7 pm tonight, it would be watching the rookie from China, Sun Yue, try to improve his nine points per game 34 minutes of action.  Or hope Sun Yue, of the LA Lakers, can up his field goal percentage from 34%.  Or to bank on China's Sun Yue to up his 3-point shooting, as he's currently just 6-of-19 (32%).  Regardless, instead of watching Western Kentucky-Gonzaga (Go Zags!) or Texas-Duke (Hook 'em Horns!), you're going to want to watch Sun Yue.  You know it, I know it, Sun Yue knows it, even the D-League knows it! :-)

For real, though, if you want to watch the D-Fender's (15-27) play the Tulsa 66ers (9-32), head over to Welcome To Loud City, who will be at the game and liveblogging about Sun Yue.  Maybe other things.  I guess DJ White is on assignment too and had 15 and 10 in his pro debut.  Shaun Livingston, former fourth overall pick, will be running the point.  Gary Forbes, the rookie out of UMass who will more than likely get a call-up in the next month and a half, will also be there.  Joe Crawford, second round pick of the Lakers, will be playing too.  Still, focus on Sun Yue!

The game on tap I plan to watch tonight if I don't go out it is the Dakota Wizards at Colorado 14ers.  Due to the Matt Brennan theorem I'm putting together, I'm picking Dakota.  Yes, with only eight players.  Yep, one being Renaldo Major, the teams best defender, and Hamed Haddadi, the teams stopper inside.  Yep, this will probably entail Carlos English playing.  Yep, even though Dakota assistant went to Utah State (one of three Utah teams that failed me in the tournament).  Yep, Colorado has my favorite player in Josh Davis and two stud point guards in Eddie Gill and John Lucas.  However, I'm testing my theory that Matt Brennan's power rankings are a curse, and this will go along way to prove it.

Other games tonight are as follows:

The Reno Rod Benson's at Idaho, who could be without Luke Jackson, Roberto Bergesen and Brent Petway, should also be a great game.  My pick - Reno.

Erie at Albuquerque is going to be played, but don't even try to watch the Futurecast, as it's consistently impossible to watch.  For that reason alone, I'll pick Erie.

Sioux Falls at Bakersfield could end up being a good game (and worth watching for Vance Palm alone), so I'm going to go with Sioux Falls just squeaking by.  I don't plan on Trey Johnson having a great game if he's guarded by Bobby Jones.