Share All sharing options for: Interview with the Charlotte Bobcats Dontell Jefferson

In lieu of your regularly scheduled programming of recaps and witty banter, we bring you this interview with NBA player Dontell Jefferson! (Recap: yesterday's games were dirtier than watching reruns of this with your roommate, so read the following!) 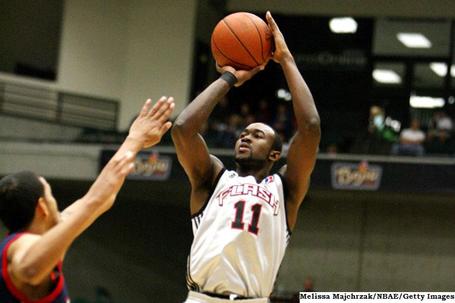 Dontell Jefferson, despite not being named a D-League all-star, he was the first call-up in Utah Flash history.  Known as the best point guard defender in the D-League, Jefferson also averaged 18.6 points, 5.5 assists, and 4.9 rebounds while with Utah.

A true D-League success story, he finally got his shot at the NBA after playing three seasons in the D-League, coming up from a seldom used back-up point guard in his first season to a starter last season and finally a D-League call-up this season.

We wish Dontell nothing but the best in what will hopefully be a long NBA career that doesn't deviate back to the D-League.

Continue on for full interview.

Ridiculous Scott: First, congrats on the call-up. You just made it through your first 10-day and the Bobcats just signed you for a second. What kind of feedback did you get from the team? Did you expect a second 10-day, even though you haven't dressed for a game yet?Dontell Jefferson: Thank you.  They really havent really spoke about it.  Some of the guys congratulated me on it and just told me to continue working hard and just try and put my self in a postion where i can be ready to the best of my ability whenever my time comes to dress and get into a game. As far as the second 10-day, I didn't know what to expect. I just tried to make sure i worked hard and did what was asked of me and just let the chips fall from there.

RS: Working so hard to come up from the D-League over the past three seasons, can you take me through how you felt when you got the call, learning you've been called-up?DJ: It was like a dream. I was still half-sleep when i got the call from my agent, but I was in total shock at first.  I mean, I can't even describe the felling.  Let's just say it was a very emotional morning for me.

RS: What have the Bobcats told you about their plans for you?DJ: We haven't spoke of any future plans, but I know my role would be to play good defense, get the ball to the open man and rebound whenever the opportunity comes.

RS: How do you think the D-League helped you develop your game, and what/who do you think was the biggest factor in your three years in the D-League that helped you?DJ: It gave me the experience of playing professional ball under the NBA rules. I was able to learn from and play against guys who had NBA experience and it made me want to work on my game to get to the next level. I think the biggest factor that helped me was my agent. When we first started talking, I was saying how I wanted to go overseas at first and not even play in the D-League due to a statement that was said to me after my senior season at Arkansas was over. But he convinced me to stay and three years later look where I am.

RS: With Cartier Martin called-up earlier this season by the Bobcats, have you guys became close? Did you know anyone else on the Bobcats?DJ: Yeah, we have become closer. He tells me the things that helped him stick for the rest of the season.  I mean, we have similar paths of making to the nba so he is definitely a guy that has advice to offer to me - I'm trying to take it all in. I knew no one else on the team, but all the guys are good guys here.

RS: What's the biggest difference between the NBA and the D-League?DJ: Well, besides the money of course..haha... I can't speak for games because I haven't got into one yet, but I would have to say the travel and hotels. Charter flights and the best hotels can't compare to the commercial flights and sharing a room in the D-League. Coming from the D-League and being in the NBA makes you appreciate being here a lot more by going through that experience.

RS: What do you do in your spare time? Assuming that Charlotte's just about as exciting as Bismarck, right?DJ: I really just chill. Watch movies, things like that. Charlotte is pretty cool. It reminds me of being back in Atlanta, just a little slower, but it's ok. I went bowling a couple of times already.  The weather is good so I can't complain.

To learn more about Jefferson, check out this post from RU.