Share All sharing options for: Rod Benson Traded to Reno

Update 3:  This is official.  Rod was on the plane to Vegas this morning. 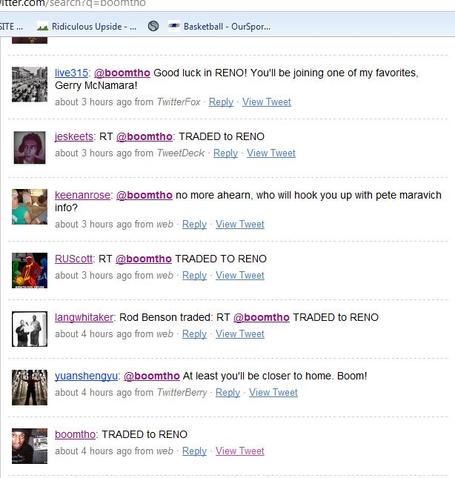 UPDATE: This is, according to everyone I've heard from, unofficial.  Simply an update from Rod's twitter account..  Would be great if this turns out to be a Rod Benson month-before-April-Fool's Special.  Regardless, I'm assuming it'll become official in the next few days a la the James White Call-Up three day's later.

Speaking of Twitter, the only D-League Twitterer, Rod "Boom Tho" Benson, has been traded to Reno.

Does this make sense? I don't know, as I don't know what's going back to Dakota.  Benson seemed to be in Duane Ticknor's dog house (Started just one of 22 games since returning to Dakota), and heard earlier this season that he wasn't having fun.  Benson is talented,so it might just be a chemistry move.  Dakota needed to trade one of it's big men, as all four were starting quality and in need of big minutes: Richard Hendrix, Hamed Hadaddi and Will Frisby are the ohers.

Reno now may have the most names ever acquired on a D-League roster:

Richie Frahm -- Has played 140 games in the NBA, started two games for the Clippers last season, stud for Gonzaga when Gonzaga was the cool new thing

Gerry McNamara -- Went to Syracuse for 45 years, was a stud, won an NCAA championship