Tonight, Austin will play Dakota at the Bismarck Civic Center, but more people will probably be watching free online.  Since the majority of D-League fans I know are either Austin, Dakota or just great basketball fans, this game will get a lot of love on Futurecast tonight, as it's the only game on and there's oodles of NBA talent.  (Naturally, the D-League is promoting other things like Erie going to overtime with an LA team already eliminated from the playoffs.)

Also, with two days left in March, 14 inches of snow have fallen in the past 17 or so hours, and according to this AP report, it's not going to quit anytime soon.  Just had the weather report below forward to me.  For reference, Bismarck is just on the west edge of dark blue mid-state. 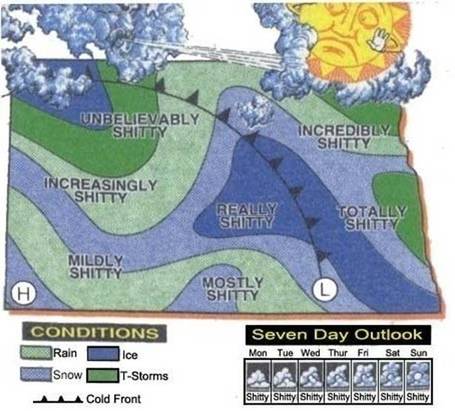 According to Wizards GM Tom Wagganer (If you know him, make sure you wish him a happy late birthday - it was last night), they're aware that it's going to be hard to get to the game, so all tickets for tonight's game can be re-used for any other home game this season.  With Dakota's rabid fan base (John Coffino was scared for his life last night leaving the game after some controversial end game decisions), I'm assuming this Futurecast could have epic Sun Yue level viewership.

This game also has at least six guys that will play in the NBA by the end of next season.  Austin has three players that have been in the NBA this season (DeMarcus Nelson, Malik Hairston, Dwayne Jones) along with Marcus Williams, who should be in the NBA.  Dakota has Blake Ahearn (Who didn't play as much as usual last night), Richard Hendrix, and the swingman combo of Romel Beck And Renaldo Major, who would be a top NBA player if they were combined into one player.

Let's break the matchup's down, since off the top of my head, I don't have a clear winner picked.  Dakota's struggling mightily, but Austin just lost to Sioux Falls and looked bad doing so.  Since each team starts a big that isn't exciting/great (Eric Dawson for Austin, Jesse Smith for Dakota), we're going to look at the most exciting starting lineups I could put together.

DeMarcus Nelson over Maurice Baker - Baker left the game upset last night, and I'm assuming he won't be happy this game either.  Baker's coming off a great game where Jasper Johnson was his primary defender.  Tonight, he's matched up with a former ACC Defensive POY, which probably won't bode well for Baker.

Blake Ahearn over Squeaky Johnson - I seem to remember that Squeaky came off the bench and shut Blake down in a big game last season.  Squeaky's got the best dreads and nickname in the D-League, Blake has a nice 3-point shot and looks the most unlike Squeaky in the D-League.  I'm giving Blake the advantage, as he's going to want to improve on his 11 point outing last night.

Malik Hairston over Romel Beck - Beck's got length on Hairston, but I think this would be a great matchup to watch.  Both are offensive guru's, but Hairston's a bit better.

Renaldo Major push with Marcus Williams - I don't know who to pick in this matchup.  Major looked great last night, and Williams is one of the most talented players in the D-League.  This will be a tough test for Major, but it'll really show the NBA if he's back to the player he was before his surgery.  I think he is.

Dwayne Jones over Richard Hendrix - This would be a matchup I'd enjoy watching.  Hendrix has disappeared against bigger competition, and big Jones is definitely competition.  Both started the season on NBA rosters, both are tremendous rebounders, and both aren't great on offense.  I'm hoping to watch this matchup at least a bit tonight.

Wish me luck.  I'm on my way outside to see if my car's going to the game with me.