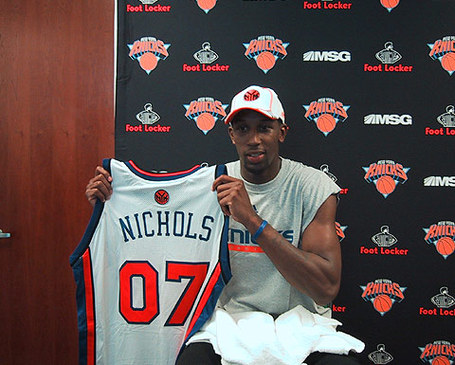 As I'd heard last week after the mass D-League tryouts, Demetris Nichols was the best non-D-League prospect there (Rumor is he never missed a shot at the tryout), but for the time, only Cheikh Samb was going to stick.  I've got word tonight from his agent that he is on his way to New York.  It sounds like D'Antoni wanted to get the guys he had acquired via trade into some sort of rotation before bringing Nichols aboard, so that issue is apparently figured out..

The 6'8" swingman averaged 20 points, five rebounds and shot 44% from 3-point land.  Along with being a solid defender and having good size out of the 3-spot, I'm not sure what's not to like.  In his last game with the Iowa Energy, he had 20 points, six boards, and five assists.

Rejoice, D-League fans, the NBA does know how to use 10-days!

According to our poll with the call-up rankings, it seems Blake Ahearn is next!