Share All sharing options for: Reno, NV -- Home Of The Boom Tho

UPDATE: He apparently had asked for a trade, which makes sense, just have to believe there was something else out there that may have filled a more pressing need, as the Wizards have lost four of their past six games.   (Link Courtesy of Lou "Captain Albano" Babiarz, best D-League beat writer in the Midwest D-League World) 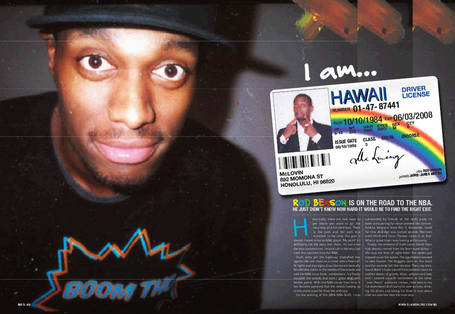 Yesterday, the most marketable play in all the D-League, Rod Benson, and subsequently, the Boom Tho Movement, moved to Reno, Nevada for Jesse Smith, who is, in my expert opinion, as Boom Tho as these guys.

Also, Smith hasn't ever been in an NBA camp, he didn't go to Berkeley with a major in Political Science (Smith went to Idaho State, and from what I can tell, never decided on a major), he isn't looking for a Boom Tho Girl (He's in fact, apparently, already found one (props)).  He also hasn't interviewed Blake Ahearn about the wonderment of Mr. Pete Maravich, nor does he have any videos on youtube involving sweet tricks using quarters that may help you get a lady or win a bet versus a certain PA announcer about not being able to balance a beer bottle on his head.

Things that Smith has done: scored the first points in Reno Bighorns basketball history, averaged nine points and seven boards over 83 career D-League games, and, since the all-star break has put up this stat line: 5.5 points and 3.8 rebounds, shooting 41% from the field.  Benson's career D-League numbers are 120 games, just 46 starts, averaging 10.3 points and 8.6 rebounds.

Now, I'm sure Coach Ticknor has a reason for making this trade that's not visible to the outside eye, but from my vantage point, it just didn't/doesn't make sense.  I would have agreed that one of the posts needed to be moved (too many good players all playing the same position), but I don't think it was the right idea to go for another big man.  Watching most of Dakota's games, they could really use depth at the 2/3.  They took care of this a bit with the signing of Romel Beck, but I don't think a third wingman would hurt, as the Wizards currently bring to the table four point guards, two 3's, and four big's.

Denham Brown, who they traded one of the best D-League point guards in Dontell Jefferson for, has somehow wound up on Iowa's roster (Brown was injured a long time ago, waived due to injury, and now popped up with Iowa).  It's too late, but if I was calling the shots, that's where the Wizards have struggled as of late.  A slashing wingman.  Rod Benson's fan favoriteness, along with his energy and charisma off the bench, certainly wasn't the biggest problem as of late - 12 points, 12 boards, and two blocks in 25 minutes off the bench last game.  He was also a solid contributor on the last championship in Dakota, which ought to mean something.

Anyway, I'll miss Rod.  Being based here in Bismarck, North Dakota, it was fun reading his blogs.  It was fun dominating him in Madden last season.  My favorite Rod Benson moment however may have come at the last game he played in a Wizards uniform:  When a ballboy asked Benson if Renaldo Major wasn't playing 'cause his back, Rod quickly replied, "No, it's 'cause you're back."