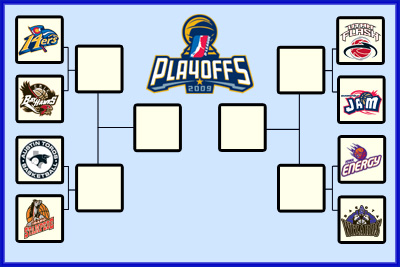 The playoffs are ready to go after the selection process tonight.  Nothing too exciting happened, right?  The D-League is stupid for going to the pick your opponent format.  Nothing will change, right?  Wrong, ladies and gentleman.  Erie was the 7th seed!  That made all of this worth it, as the worst team, seed wise, wasn't chosen.

Anyway, here's the schedule for the week:

Why is Idaho just kind of at Austin?  Because apparently Austin can't get into their regular arena and are going to have to play at Concordia University in Austin.

A D-League playoff game being played in a Division 3 college's arena?  Wow.  For such a great league, I'd think that Austin would be able to at least secure home dates for the playoffs - this happens with the lower minor leagues, not a team that boasts the coach of the year a strong relationship with it's owners, the San Antonio Spurs.

Wait, a D-3 arena.  Will there be Futurecast?  This seems pretty doubtful.  Futurecast brings the D-League to quite a few members of my blog, and I'm sure many more that haven't stumbled upon our great community.  We have TorosGirl, who isn't in Austin, IceManCometh, who lives somewhere in North Carolina, JRose and jo22collins that are in Minneapolis and I'm sure many more fans that don't live in a D-League city (face it, the odds of living in Bismarck or Des Moines as opposed to the rest of the world are pretty slim).

The D-League's biggest selling point is Futurecast, as fans can watch it, for free and when it's working, all over the world.

If the D-League isn't able to get futurecast up in Concordia, this game should be moved to a place where fans can watch from all around the world.  Idaho has a great fan base, Quin Snyder has a great fanbase, the Spurs fans are becoming more and more interested in the Toros.  This game needs to be on Futurecast.  If the D-League found that it needed to pimp Sun Yue to us incessantly because of the futurecast hits in China he'd provide, there's no reason a playoff game isn't on Futurecast.