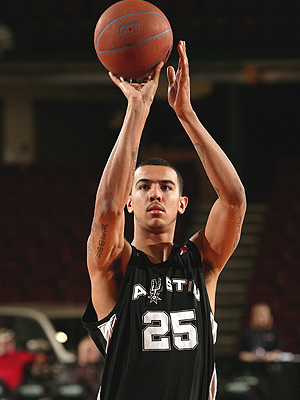 Marcus Williams has been called up to the San Antonio Spurs, apparently taking the spot of Manu Ginobili, who was recently lost for the season.  In 45 games in the D-League, Williams was averaging 23 points, 7.0 boards and 5.3 assists, as a sort of point-forward for the Spurs affiliate, the Austin Toros.

Williams, a former Spurs second round pick, was called up at the end of last season the LA Clippers, and was recently named D-League Performer of the Week for last weeks efforts - 27.5 points, 10.5 rebounds and 11.5 assists per contest!

We've discussed Williams at length as of late, so I'll defer to our most recent call-up rankings:

Williams is the consensus for us as the player most deserving of a call-up.  In the month of March, Williams averaged something ridiculous: 25.1 points, 7.1 rebounds, 5.8 assists, shooting 92% from the free-throw line along with showing improved range, hitting 36% from beyond the arc.

He's also extremely long and handles the rock quite a bit for the Toros.  Williams has had a little trouble adjusting to the recent additions of DeMarcus Nelson and Malik Hairston, but lines like his last game - 11-of-20 from the field for 29 points, including 3-4 on his threes, six rebounds and four assists are becoming the norm for him.

For more analysis, check out this RidiculousUpside post where Jon breaks down one of his recent games, or check 48 Minutes of Hell here (can he play the point?) and here (where Tim Varner talks Spurs, D-League style).

Since the Spurs have 15 players under contract, I'm assuming that Malik Hairston has been waived, since he wasn't just recalled.  There is the possibility of an injury exception, however.

UPDATE: They announced this on Futurecast - also heard by commenter TorosGirl.