With the nineteenth pick in the SBNation Mock Draft, the Atlanta Hawks, represented by SBN's very own Peachtree Hoops, select... (Drum Roll please)

From Peachtree:  Not sure if I am more depressed because my top five realistic choices for the Hawks are off the board or that BJ Mullens has already been selected. I feel like the Hawks have the 42nd pick right here.

That being said the Hawks select Jeff Teague. If Mike Woodson stays around for the foreseeable future, Teague has a game that our wonderful coach can fall in love with. He can shoot the three and pass the ball to Joe Johnson.

Under a normal coach or less Joe Johnson heavy offense, Teague represents a huge gamble. It is tough to place all the eggs in an Acie Law/combo guard Teague basket. And the other option is resigning Mike Bibby with Teague being at worst a poor man's Flip Murray and, at best, an athletic upgrade to the point guard position. Nothing is certain and neither option inspires an onslaught of season ticket purchases.

Considering that Jeff Teague may have earned his draft position during the first 17 games of Wake Forest season and his production fell off by mid January, he represents a large risk. But no player is a sure thing at 19. Shoot, BJ Mullens was drafted. And in Teague's case, those first 17 games were pretty dang good. 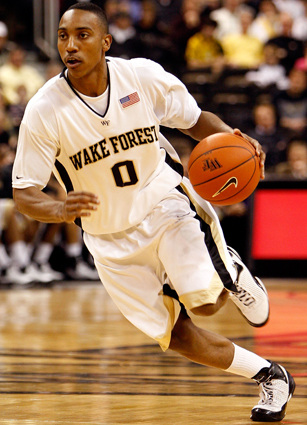