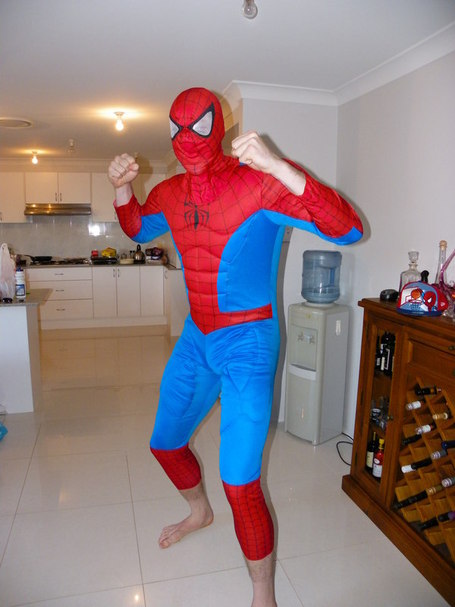 A.J. Ogilvy, the 7-foot rookie center out of Vanderbilt, seems like a pretty chill bro - if you couldn't tell from the picture above.

Since going undrafted in the most recent NBA Draft and "playing" for the Chicago Bulls Summer League squad ("playing" in quotes because he totaled 25 minutes and received a DNP in two games), the Australian big man has taken to the Twitter.

And ... it's been great. If you don't believe me, believe what I tweet:

@ScottSchroeder: I wish A.J. Ogilvy was in the NBA. RT @ajknows may or may not have just purchased a spiderman costume. Hint; i did. #notsorry

And then, as you may have noticed above, he went ahead and tweeted a picture of himself Down Under in a Spiderman costume.

Now, to get back on track, Ogilvy is the type of player I would've liked to see in the NBA Development League this season - his lack of upside is probably what caused him to go undrafted this year, but he's the type of polished low post player that just isn't hanging around in the D-League and therefore was probably more likely to get a call-up.

A polished near-7-footer that averaged 15.3 points and 6.7 rebounds over three seasons in the SEC while having frosted tips(!) is the type of guy that should stick around for a bit to either get a call-up or head to Europe once it looks like that isn't going to happen - say in January after the D-League Showcase.

Of course, since he wears Spiderman costumes and seems to have a sense of humor, he'd probably get what shall now be known as the Rod Benson treatment.

Maybe playing for Beşiktaş Cola Turka isn't a bad idea after all.