Dwayne Collins, the 60th pick in this year's NBA Draft by the Phoenix Suns, has opted to head to Europe this season to play for Cimberio Varese in Italy's top division according to a report from Tuttobasket.com.

Collins, 22, had his knee scoped on the 18th of June to repair a small meniscus tear and thus missed a chance to impress in Las Vegas during the NBA Summer League, but as the last pick in the NBA Draft his chances probably weren't great to play in the NBA this season anyway.

Still, the Suns Director of Player Personnel told SB Nation Arizona last month that he would have liked to see Collins battle for a spot in training camp.

"Gani Lawal and Dwayne Collins -- I would love to see those guys battle in camp because they both play hard and they are both physical and they both bring a presence to our team that I think is going to be a real positive."

Since the Suns already employ 12 players with guaranteed contracts - and seem to be targeting a guard for the 13th spot with the recent signing of Matt Janning -Collins' decision to make some money next season was probably the right one.

Collins' going overseas rather than competing for a spot in training camp also ensures that the Suns will hold his rights for next season.  This is good for both parties because it means that  the Suns will not have wasted a draft pick and Collins' decision to get a tattoo of Mr. Irrelevant on his hand won't all be for naught. 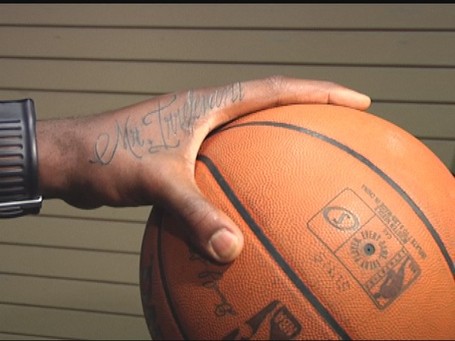 The 6-foot-8, 245 pound Collins averaged 12.0 points, 7.8 rebounds and 1.1 blocks as a senior at the University of Miami.  Though the well-built big man isn't the most talented player on the court, his athleticism - and 7-foot-4 wingspan - means that if he's able to add some polish overseas this year, he should definitely be able to come back and compete for a spot next season on the Suns roster.

Plus, I'm willing to bet that the Suns will probably hold the number 60 jersey Collins had planned on wearing this season for him until next year.