The NBA lockout has been talked about numerous times relating to how it hurts the NBA Development League on Ridiculous Upside, but one thing I'm not sure I've specifically mentioned yet has been overlooked. If the NBA lockout isn't solved by the start of the NBA season, any players that appeared in the NBA last season won't be eligible to play in the D-League this season.

That would seem like a big problem for the D-League's talent pool that typically features fringe NBA talent, but D-League commissioner Dan Reed said otherwise during a recent interview with the Portland Press Herald.

Admittedly, the loss of NBA talent "will hurt us slightly," Reed told the Herald. "But overall, the fans can expect a comparable level of talent (to the past). The fastest way to further your career is still through the D-League."

The fact that Reed is downplaying it isn't surprising, but the fact remains that an end to the NBA lockout -- possibly as soon as this afternoon -- would be best for all parties, ancillary and otherwise.

Moving on from to a more positive development related to the D-League, NBA legend Jerry West was in Bismarck last week and had some good things to say about the Development League. West's Golden State Warriors will be involved closer than ever this season as they purchased the Dakota Wizards.

"When it first started, I was sort of skeptical about it," West told the Bismarck Tribune. "I couldn't see the value of it at the beginning. I do see the value now. We've had a number of players who have come into the (NBA) and been productive and played a few years. The players that haven't had a chance to develop, maybe they're changing positions, maybe they start playing late. We've had numerous coaches who've been very successful in the NBA who started in (the minor leagues)."

Last, but not least, in this morning's round up: The great Luke Schenscher is blogging with a column in an Australian newspaper awesomely and appropriately titled The Gospel According To Luke. 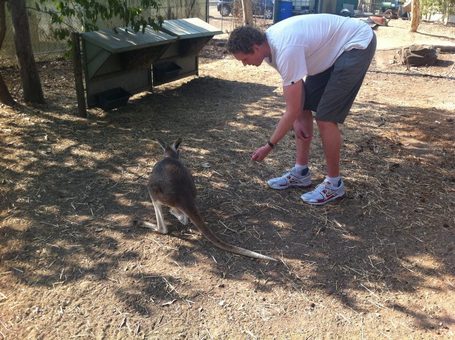 I have no idea why he didn't include the above picture of him next to a kangaroo (wallaby?), but at least now I've brought it to the public.