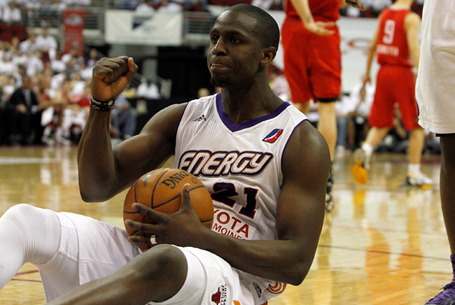 With the NBA season looking as it’s dissolving right before our eyes, the minor league of the NBA, the D-League, is soon to tip off its season soon with no holdout restricting their season.

The Iowa Energy officially start their season Nov. 25 at new franchise Canton (affiliated with Cleveland), but fans were invited to Wells Fargo Arena last night to an Open House to get fans thinking about the upcoming season. It will be hard to forget last season for fans after coming off the franchise’s first championship in their short time here in Des Moines.

"Last year was such a blessing," said Moses Ehambe, who is only one of three returning players for Iowa this season. "After having a losing season over in Spain, then being traded from Tulsa to Austin to here, then winning a championship was just amazing."

Flip the switch from last season, because this one will be entirely different. New coach. Nine newcomers are the majority of the Energy roster, one of them being Jarrid Famous, a 6-11, 240 center from South Florida.

His goal is to make a stand on defense.

"I just got to do the same things I did in college," Famous said. "I hope to be solid on defense this year. My goal is to get two blocks a game if not more."

With nine rookies on this roster, Ehambe realizes that his leadership will be vital to this team’s success.

"Leadership is going to impact this team mightily," Ehambe said. ""You need someone to be able to bring that experience. I know what we went through last year, and what it takes to get back to the championship level this year."

Ehambe points out it’ll be the little things that will decide whether the Energy get back to the D-League Finals.

"It takes bringing intensity to every practice. Every team needs that."

Ehambe points out that the young players have come out and played solid in the first few practices.

"They come to play every day," Ehambe said. "We got guys who are willing to get down and play defense every time, and they play extremely tough."

One of the guys who will hope to enforce intensity is new head coach Kevin Young. When he first interviewed for the opening position once Nick Nurse left for Rio Grande Valley, Young’s instantly knew what he expected out of this year.

When looking at his young squad, Young is not concerned about the age of the team.

"The rosters are ever changing in D-League, so you can never get too comfortable. Having new guys come in is just part of the league."

However, Young points out that the biggest difference from his last position in Salt Lake City and here in Des Moines will be the youth of the roster.

"In Utah, we had guys who had been around for awhile and knew what was going on," said Young." Here, it’s kinda new to everybody."

Young comes in from Utah after completing the 2010-11 season with a 28-22 record. The Flash did make the playoffs, but were ousted in the first round to ironically the Energy.

Young says he will carry a lot of the pricniples he had while in Utah over here to Des Moines.

"There was no secret that that worked last year," said Coach Young."We’re ready to suit up and play."

The Energy’s first home game will be Dec. 3 as the Energy take on the Erie BayHawks.