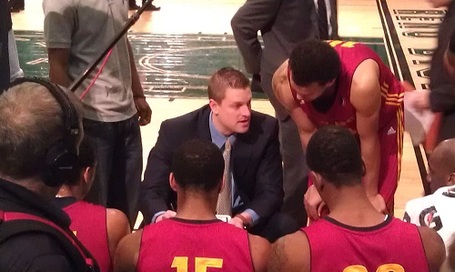 It’s no secret that the head coach position with the Fort Wayne Mad Ants is one of the more difficult assignments in the NBA D-League. With their season ending 99-98 win over the Dakota Wizards, the Mad Ants finished with a record of 14 and 36 – making this the worst of five consecutive sub-.500 seasons. Expectations are high and patience is running thin. No one feels the pressure more than head coach Steve Gansey.

It’s easy to fire a head coach and move on to the next. In fact, this is the path that the Mad Ants have often chosen having gone through four coaches in their five years of existence. Even Coach Gansey would be the first to admit that his 9-26 record is disappointing, however; there is a compelling case to keep him at the helm for one more season.

1. IT’S CALLED THE DEVELOPMENT LEAGUE FOR A REASON: The Mad Ants started the season with a 5-10 record which led to the release of Joey Meyer who has more D-League wins than most of the current coaches. At 26 years old, then assistant coach Steve Gansey was promoted to ‘interim’ head coach. Over the next 35 games, Coach Gansey only gained 9 wins, but got the much needed experience to be successful at this level.

The D in D-League stands for DEVELOPMENT. When a GM appoints a 26 year old coach with no prior experience to lead a team, it only makes sense to view that time as a long term investment. Otherwise, what was gained from this past season?

2. CLEANING UP SOMEONE ELSES MESS IS NEVER FUN: When Coach Gansey took over the team the offense and defense from training camp along with the roster were set in place. Fifteen games in to the season is not the time to develop offensive and defensive philosophies. With the roster changing week to week, just getting new players acclimated to the team could be considered an accomplishment. The summer is when coaching philosophies and rules are established. Coach Gansey is a true student of the game and has some interesting takes on plays that were successful this year. Having a full summer and training camp to prepare would provide a true view of his ability to prepare and coach a team.

3. PERSONNEL IS CRITICAL TO D-LEAGUE SUCCESS: The Mad Ants had the second highest number of roster changes in the D-League with 28 different players on the team throughout the season. While all teams in the league go through changes due to various reasons -- NBA training camps, call-ups, injuries, and releases -- the Mad Ants struggled to acquire the talent needed to be competitive. This was especially true during the month of February when the team went 0-10. Picking the right players is perhaps the most important aspect of success in basketball. In Fort Wayne this activity is handled by the front office, not the head coach.

Going with a 26-year-old coach was a bold move. Considering that Coach Gansey had no prior head coaching experience it would have been unrealistic to expect him to outperform former head coach Joey Meyer in his first opportunity to lead a team. With that said, it only makes sense that these last 35 games were an investment in Coach Gansey’s coaching future with the Mad Ants organization.