Xs and Os: The How and Where of Seth Curry's Buckets

Seth Curry introduced himself with an array of baskets. Let's take a quick look at his NBA D-League debut performance.

Share All sharing options for: Xs and Os: The How and Where of Seth Curry's Buckets 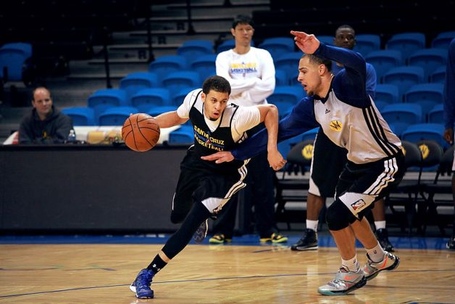 You can only imagine how difficult Seth Curry's development as a professional basketball player must be. Undrafted after a solid career at Duke, Curry was invited the Golden State Warriors' camp without a guaranteed contract (because he's not related to JR Smith, obviously) and saw limited preseason action. The Warriors waived him, but smartly chose to closely monitor his development in Santa Cruz and they had to love what they saw in his first game yesterday. The accomplishment is one thing, setting the Warriors' single game scoring record with 36 points on 12-19 from the field, but to me the really impressive thing is how he got his baskets.

We know Curry can shoot, but the biggest question I had coming out of Duke was his position. At 6'2 is he good enough of a ball handler and can he combine that with what I saw as limited court vision? If last night was any indication the answer is a resounding yes.

Take a look at his highlights and notice where he gets his buckets and more importantly how he gets them. Curry got a few of his looks off pick and roll deciding to pull up mid range near the right elbow. He also did a nice job of utilizing big men screens to free himself and utilize his pure stroke and trigger. He also showed the ability to lock into an isolation 1-4 set and finish going left.

That's impressive in my opinion.

But to me this sequence was his most impressive effort and had him looking a lot like his brother Stephen, one of the game's elite scorers. Great scorers have the innate ability to score a ton of points, obviously, and the variety of where they score certainly separates them from the pack. But a lead guard has to have the ability to utilize patience and Curry was very good at it last night. 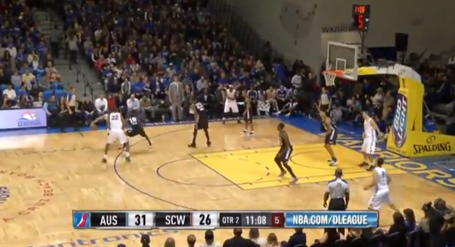 Here, Curry decides to use a high wing screen... 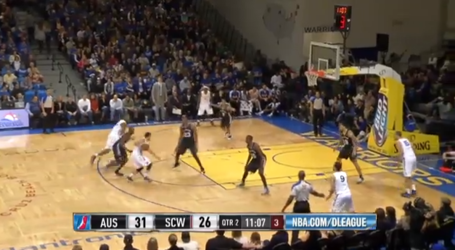 As he turns the corner he smartly uses patience in waiting for the defenders to commit. Orion Outerbridge, who set the screen, is too far from the basket and not in proper shooting position to receive a pass. If the Curry were to make a decision with the ball now it would be a contested pull up or a kick out pass to Cameron Jones for a potentially contested 3 pointer. 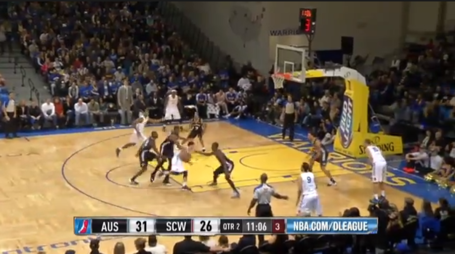 By protecting the ball and keeping his dribble, and also waiting for the defense to commit, Curry now has several options to decide upon. He can still kick out to Jones for a less contested 3, shuffle a pass to Outerbridge or... 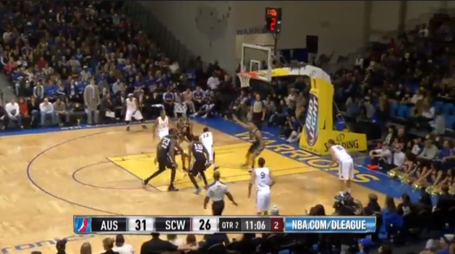 ...take a power step towards the basket drawing Joe Alexander's man for another potential kick out. 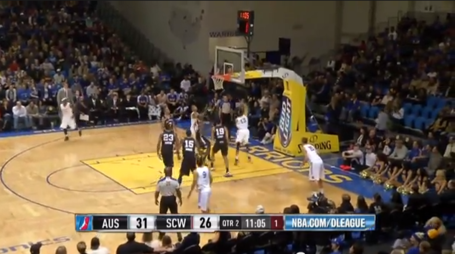 Because he got the step, Curry was able to get in the lane and make the best decision, which is getting himself a lay up in an half court set. If Curry can learn to attack the basket with his dribble he will quickly raise his value and word will spread that he can be an NBA-level quarterback.

You have to love what the Warriors are doing in properly using Santa Cruz as a development hub for the big club. You also have to love it from a marketing standpoint seeing that both Curry and Mychel Thompson are on the roster and the home atmosphere is so similar to Golden State's. Fans can easily associate the NBADL team with the big club.

I wish more NBA teams matched that concept from a look and feel perspective.