Can Toure' Murry Make An Impact for the Knicks?

Former Wichita State and Rio Grande Valley star Toure' Murry will be in training camp with the Knicks. Can he bring depth at the point guard position?

Share All sharing options for: Can Toure' Murry Make An Impact for the Knicks?

The New York Knicks Vegas Summer League team had some intriguing names on its roster in August. C.J. Leslie, Jeremy Tyler, Tim Hardaway Jr. and Iman Shumpert were some headliners, all looking to make their respective impact. The week started with the focus solely on Shumpert, the third year defensive guard who the Knicks would like to see develop more at the lead guard position. That experiment didn't last long after Shumpert shut down his Vegas week after only one rocky game at the one, reportedly to the chagrin of their owner James Dolan.

In the next game, Hardaway Jr., the Knicks first round pick out of Michigan, went down with a wrist injury opening the door for rising NBADL star Toure' Murry to get some minutes. Thanks to some highlights offensively and some good work defending the ball defensively, Murry impressed Knicks brass enough to make an impact and get a veteran camp invitation from the team. But with the Knicks depth at guard, can Murry earn a spot and become another cheap, impact roster addition that the Knicks have uncovered over the past few years following in the footsteps of Jeremy Lin and Chris Copeland?

In watching tape on Murry, what I like most about him, along with the fact that he was able to show it off in Vegas, is his ability in the open floor. And from what I've saw, Murry can make an instant impact by being disruptive defensively, particularly with his length and positioning on the ball. He's raw, but his instincts and footwork are natural skills that can really develop and be a fit. Especially on a team that lacks the natural defenders that the Knicks do. He can defend three positions (PG-SF) and most definitely can guard the ball at the NBA level in my opinion. Plus having 2x All-Missouri Valley defensive awards on your resume proves willingness. 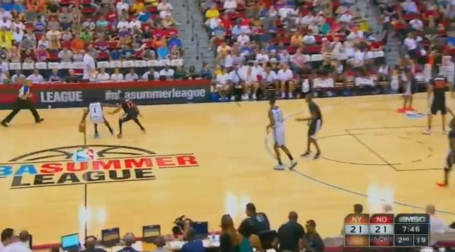 To me, sometimes the most telling things come at the most simplest times and this example is no different. Watch Murry force his defender into a short floor as he tries to set him up in pick and roll. 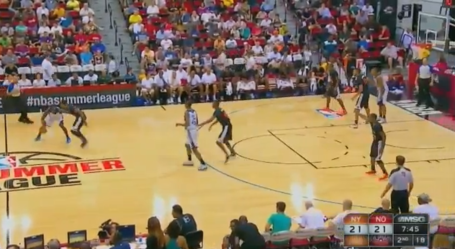 Simple thing here, but incredible fundamentals. Notice his shoulders and feet beating the PG to the spot creating no space or direct line to the screener. This subtle move defensively causes the PG to have to go "east/west" with his penetration pulling the defender further out to free him with the ball screen. 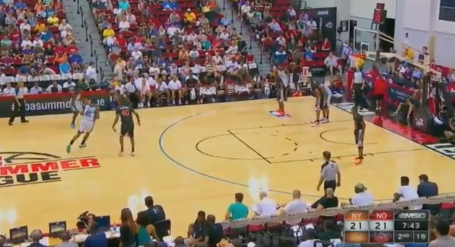 Because of his defensive positioning the PG chooses to go to the shorter side of the court in an attempt to land a screen. Knowing his opponent isn't in a position to score with a jump shot, Murry chose to go under the screen, making it an easy win for them in the 2-man game. 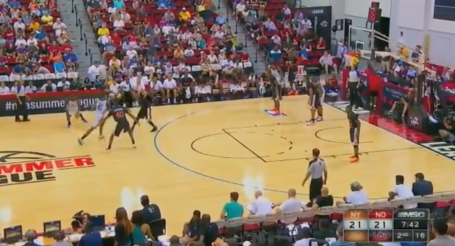 Here, Murry is under the screen but still very much in position to recover to stop penetration to the lane.

With the PG's lane restricted and with the PG having gone about 10 whole feet in 5 seconds with the ball (see shot clock), Murry has forced a lateral pass that is jumped and deflected by a teammate. This is a direct result of great ball pressure and winning a pick and roll battle. An overall incredible individual defensive possession.

I'm curious to see Murry's ability to score, because purely defensive guards create limitations to their teams in certain situations. He could definitely fill it at times at Wichita State, but averaged just 9 points and 3 assists in 52 games with Rio Grand Valley.

He could fit well with a Knicks team that definitely can fill it up with the best of them but it's his ability to defend in the half court that may be his opening. That and the confidence needed to stick.

"The biggest challenge for him is that he has to understand how good he is," former Vipers coach Nick Nurse said during last year's playoffs. "He's a really good player."

Murry is going to have to show coaches that he can consistently play at a very high level in camp, because the Knicks have a need for backcourt defense with J.R. Smith starting the season on the sidelines, and recently signed Beno Udrih isn't exactly a defensive dynamo.

I'm very interested in keeping an eye on Murry's camp. At the very least, it will be a very good experience for him and the next step in his progression.