Shabazz Muhammad's Double-Double Caps Off A Huge Night For Iowa

In his second game with the Iowa Energy, Shabazz Muhammad recorded a double-double by putting up 22 points and 11 rebounds in just 23 minutes.

Share All sharing options for: Shabazz Muhammad's Double-Double Caps Off A Huge Night For Iowa

On the last day of the 2014 D-League Showcase, Minnesota Timberwolves rookie Shabazz Muhammad played his second game with the Iowa Energy and impressed the home crowd in Reno yet again. In just 23 minutes of action, the former Bruin scored 22 points on 6-for-11 shooting from the field and 10-for-11 from the charity stripe. He recorded his first double-double of the season, by pulling down 11 rebounds and also dished out three assists and poked away two steals.

As was the case in his debut against the Rio Grande Valley Vipers, Muhammad got off to a quick start and was all over the place, grabbing rebounds, sprinting up the court, looking down at the rim and scoring points on the fast-break or on strong put-backs that you don't usually see from 6-foot-5 shooting guards. To add to that, he knocked down two jump-shots against the Armor, which was nice to see, and on the few occasions he was double-teamed, he made good passes out to his open teammates. He didn't force the issue - evident by his zero turnovers - and all of his shot-attempts were from good looks at the basket.

However, he looked a little out of place in half-court sets again and sometimes, he hurt the Energy on the defensive end by leaking out far too soon on the fast-break. Take this moment as an example: 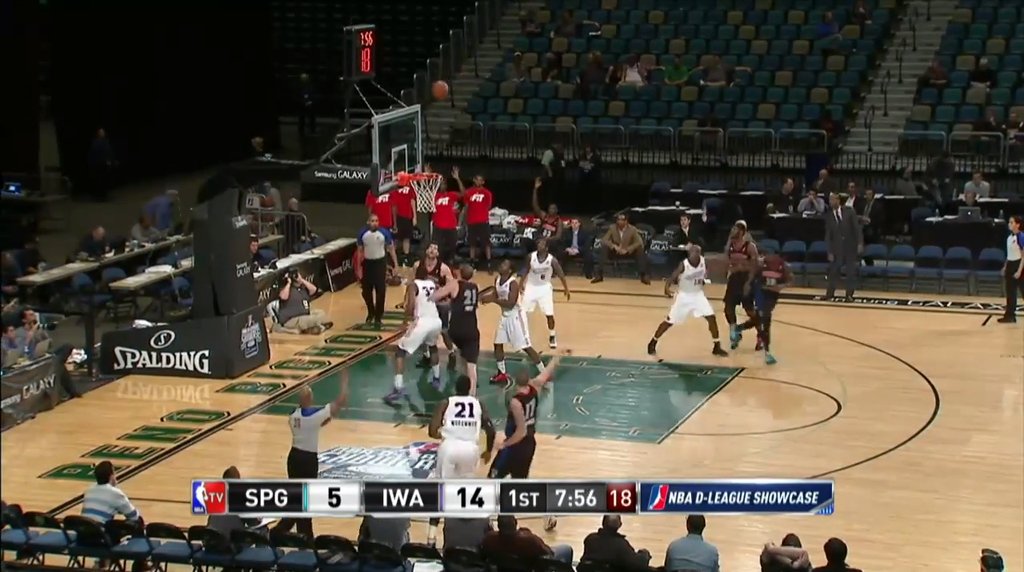 Off of an in-bounds play in the first quarter, Nets assignee Tornike Shengelia blew right past Muhammad, which drew a double team from Othyus Jeffers, leaving Dennis Horner all alone on the three point line. As soon as Shengelia passed it off to Horner, Muhammad did a good job of recovering and contesting the shot, but he ran right past him to leak out on the fast-break instead of boxing him out. The result: Horner missed the three, chased down his own shot, got fouled right under the rim by Varnado and knocked down two free throws.

It wasn't the only time it happened in the game, but luckily, it didn't hurt the Energy in the long run because they blew the Armor out of the water and held a comfortable lead pretty much all night long. Muhammad is clearly a good finisher when he gets close to the basket - he has shot 13-for-18 at the rim in his two games with the Energy - and it's encouraging to see him recognise that by putting himself into positions where he is most comfortable. Whenever the Armor missed a shot or the Energy gained possession of the ball, he was one of the first players up court, sprinting towards the rim, making himself as big of a target as possible and it worked to a charm. But, quite simply, he won't get away with not boxing out in the NBA.

Another knock on his defense in this game in particular was that, on several plays, he made weak close-outs on players like Dennis Horner and Adonis Thomas, both of whom have been efficient shooters from beyond the arc so far this season. Had he done a better job of contesting their shots, they wouldn't have had such good looks.

Muhammad only played a total of 48 minutes in his two D-League games this week, but he scored 46 points on 62.5 percent shooting and pulled down 18 rebounds. He's done a fantastic job on the glass and has been too much to handle for opposing teams around the basket and on the fast-break, scoring 13 of his 23 points per game on second-chance opportunities or in the open-court. He's also played with tons of energy, which has been a great fit in the Energy's high octane offense. Obviously there were a few little issues here and there, but he's had a great stint with Iowa and has clearly been a man on a mission.

If he does happen to get minutes with the Timberwolves some time soon, his offensive game may not be quite up to scratch to contribute in the way many expect, but if he plays with the same energy and aggressiveness as he has in the D-League, he could be a bright spot off their bench and an exciting prospect for the future.