The Orlando Magic signed Springfield Armor's Adonis Thomas to a 10-day contract Tuesday, making him the twenty-fourth call-up for the NBADL this year.

Thomas averaged 16.2 points, 4.2 rebounds and 1.3 assists while appearing in 26 games for Springfield.  While not the most impressive numbers on paper, the Orlando Magic saw something in the former Memphis Tiger that led them to offer a deal.

Thomas played in 55 games (44 starts) during two years at the University of Memphis, averaging 10.7 points, and 4 rebounds in 27.5 minutes per game.  He was named to the Conference USA All-Tournament Team in 2013.

Thomas shot over 50 percent from the field in 12 games this season for Springfield and averaged 24 points over the last seven games.  Consistency is the key to earn a call-up, and with his numbers improving recently, it's no secret why the Magic decided to give him an opportunity. 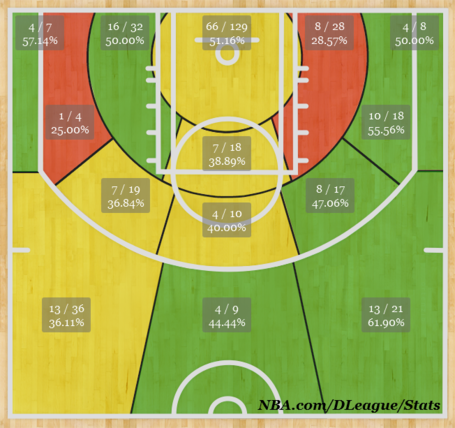 Undrafted in 2013, Thomas joined the Brooklyn Nets' training camp, only to be waived and sent to Springfield via the NBADL's affiliate rule.

Thomas was barely listed on the NBADL's Prospect Watch, ranked No. 29 before his call-up to Orlando.  Plenty of other top prospects were passed up to sign Thomas, including No. 5 prospect Terrence Williams and No. 10 prospect Daniel Orton.

Thomas, (along with newly signed Dewayne Dedmon) is the first signed 10-day contract offered by the Magic since March 31, 2005 when the team signed Andre Barrett.

Interestingly enough, when asked by reporters if he knew how Thomas could help the team, Orlando Magic coach Jacques Vaughn had a peculiar answer.