In anticipation of next week's D-League All-Star game, Ridiculous Upside is going to give a brief scouting report on the twenty NBADL prospects who will compete in the competition. To start this two-part series, we're taking a look at Steve Hetzel's "Futures" team that features DeAndre Liggins, Pierre Jackson and Dewayne Dedmon.

Share All sharing options for: Breaking Down the 2014 D-League All-Star Game Participants: Part 1

The NBADL recently announced the names of 20 worthy D-Leaguers that will participate in next Saturday's All-Star game. Although the announcement was about as loud as a quiet church mouse compared to their NBA counterpart, the D-League All-Star showcases twenty players likely to find opportunity in the NBA. Some are former NBA vets (Devin Ebanks, Melvin Ely and Hilton Armstrong) and other are youngsters seeking their first cup of coffee (Troy Daniels, Pierre Jackson and Justin Hamilton). Regardless of who they are -- or how they got there -- this game is a chance for them to showcase their skills while they continue pursuing a dream to, one day, play in the NBA.

In anticipation of next week's contest, Ridiculous Upside is going to give a brief scouting report on each of the two All-Star teams. To start things out, we're going to preview Steve Hetzel's "Futures" team that features a good mix of NBA vets and up and coming players. Let's take a look.

Eight years after being a top-15 pick in the 2006 NBA Draft, Armstrong (29) is still holding on for a potential return. After a brief stint in Golden State this past December, Armstrong has been a solid frontcourt presence on a Santa Cruz team that's dominated by their two-headed backcourt of Cameron Jones and Seth Curry. Utilizing his 7'4" wingspan and quick footwork, Armstrong is one of the most dangerous offensive big men in the NBADL due to his ability to put up a solid hookshot or motor his way to the rim on pick and rolls.

As the little brother of the best sharpshooter in the NBA, Seth Curry is slowly starting to make his imprint on the organization that's currently dominated by Stephen. While Seth clearly showcases the shooting touch that has been with his family since Dell Curry was lighting up Charlotte in the early 90's, he's starting to develop into an extremely solid point guard. Curry's 2.11 AST/TO (assist to turnover ratio) puts him in the upper echelon of D-League guards which could lead him to a 2nd NBA opportunity after his brief stint with Memphis.

Mere days after the 76ers elected to waive Dewayne Dedmon after two separate 10-day stints, the rookie center will make his return to Santa Cruz in time for next week's All-Star game. While the 7-footer showcased his solid rebounding abilities during his short stint with Philly, Dedmon was able to utilize his natural physical abilities to become a solid post-up option. Thanks to his 7'4" wingspan, Dedmon is close to perfecting a left handed hook shot, which could become the weapon that's needed to make him into a permanent NBA player.

On the other end of the court, Dedmon is able to utilize his lanky and athletic frame to acquire 2.3 blocks per game. With that said, Dedmon's overall defensive rating sits at a pretty hefty 104.2. While his defensive skills are still raw, Dedmon is still one of the best bigs in the NBADL because of his solid offensive abilities and continued dominance as a rebounder.

Fresh off an extremely successful stint with the LA Lakers, D-Fenders guard Manny Harris will take his talents to the All-Star game as a talented scoring threat. Similar to Mad Ants guard Ron Howard, Harris showcases an ability to cut to the rim better than a lot of players in the NBADL. Thanks to those aforementioned skills, Harris is most effective in the restricted area (small circle surrounding the basket) where he's shooting around 65%. As we move away from that area, Harris becomes a pretty limited offensive player despite averaging 30.6 PPG.

While that limited skillset may deter scouts away from most players, Harris should remain on the cusp of another NBA opportunity.

With the NBA becoming a more perimeter-minded game, Sioux Falls forward Justin Hamilton is definitely an appealing candidate for a 10-day contract. Shooting 39% from the perimeter, Hamilton has made his imprint as a solid shooter from beyond the arc. With those skills in mind, Hamilton is an all-around solid offensive player.

As apparent from the following clip, Hamilton showcases quick footwork which allows him to be a pretty solid pick and roll threat when you factor in his shooting ability. Hamilton is also a viable low-post threat who can roll his way to the rim or lace up a solid hook shot.

Since arriving in the D-League during November's draft, Pierre Jackson has been the NBADL's main attraction because of his insane scoring ability. Despite his small 5'11" frame, Jackson is able to be as effective from the restricted area as he is from the perimeter by utilizing speed, a quick first step and a muscular build. All of those traits have lead to Jackson averaging 30.2 PPG on 46% shooting, which is bound to improve if he keeps on the blazing pace that he's currently on.

While his scoring ability puts him on top of the D-League mountain, Jackson is still a pretty flawed player. Averaging 4.1 turnovers per game, Jackson could possibly be labeled as an unreliable PG which might be a hinderance on his overall future. With that said, Pierre Jackson will be heading to New Orleans to play in the NBADL All-Star game which will be an opportunity for him to play in front of the same organization that currently holds his NBA rights.

After spending the 2012-13 season with the Cleveland Cavaliers, Canton forward Kevin Jones will be making his way to New Orleans as he pursues an NBA return. 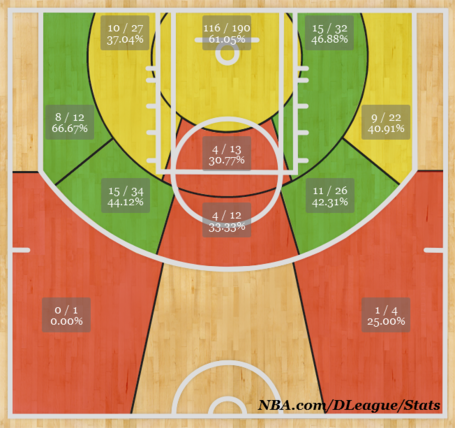 While the work he does on offense draws the most attention, it's Jones' effort on the defensive end that has helped push Canton to the top of the D-League standings. Kevin Jones stands as the main anchor besides Jorge Gutierrez on the best defensive team in the NBADL.

After his unceremonious exit from the OKC Thunder, Sioux Falls wing DeAndre Liggins has turned into one of the best all-around guards in the D-League. During his time at OKC and Kentucky, Liggins was primarily known as a defensive specialist who was limited on the offensive end. As he starts his 3rd season as a pro, Liggins has definitely showcased a huge improvement on the offensive end. From the perimeter (34% from beyond the arc) to making his way to the free throw line (averaging nearly 5 free throw attempts per game), Liggins has definitely become a complete offensive weapon for Sioux Falls. With his scoring touch in mind, Liggins is a pretty solid distributor for the Skyforce as he's currently averaging 5 APG, which is great for a 6'5" wing.

On the other end, Liggins continues to be an absolute force as he's one of the best on-ball defenders in the D-League. Utilizing his athletic 6'5" frame, Liggins is able to stick to his opponent like velcro which has helped lead hm to an NBADL guard best 95.6 Def Rtg.

As the only player on the "Futures" team who's currently on an NBA roster (Utah Jazz), Thomas is still going to use this game to showcase his skills that might propel him to a more definitive spot in the Association. Similar to Liggins, Thomas used this D-League season to help certify his role as a complete offensive player. From opening night, Thomas electrified the NBADL with his new ability to shoot from beyond the arc. While the 6'9 forward has always been a good low-post scorer, Thomas boosted his NBA stock by being a solid 43% perimeter shooter.

While Thomas' perimeter ability helps him develop into a more complete offensive player, his work on the defensive end is what makes him so intriguing. With his solid athleticism and 7'2" wingspan, Thomas is a pretty effective defensive player, averaging 2.3 blocks per 36 minutes. While those numbers may seem pedestrian, they would still put him near the top of Utah's roster.

As the final player on Steve Hetzel's "Futures" roster, Maine forward Chris Wright is making his way to New Orleans based on two factors: athleticism and ability to cut to the rim. While he averages 22 PPG, around 85% of his offense comes from either the free throw line or the restricted area. With the combination of quickness and athleticism, Wright is able to motor by the good majority of D-League defenders as he glides his way to the rim.  Even though that's a solid asset to have, that could also be the main reason why Wright hasn't had a gig in the NBA since his short stints with Golden State and Toronto during the 2011-12 season.

While Wright's athletic play on the offensive end makes the highlight reels, his play on defense is what has helped make him into a two-time D-League All-Star. Similar to Liggins and Thomas, Wright is able to utilize his athletic abilities on the defensive end which allows him to guard multiple positions. While the 6'8 Wright plays the majority of his time at SF, he's able to use his athleticism and quickness to be able to guard SG's and PF's which kind of makes him into a D-League utility man.