Troy Daniels dazzled in the NBA on Wednesday night, scoring 22 points and knocking down six three-pointers for the Houston Rockets, proving to his team that he belongs to play alongside some of the world's best talent.

Troy Daniels has had a wild few weeks.

After the Rio Grande Valley Vipers' first game of the D-League Playoffs on Tuesday, April 8, he flew to Denver to join the Houston Rockets in their matchup against the Nuggets. Daniels stayed with the team for Friday night's game in Minnesota against the Timberwolves, before re-joining the Vipers Saturday afternoon to take on the Iowa Energy in the second-game of the playoffs. The 22-year-old then met back up with the Rockets that night to face the New Orleans Pelicans.

To recap, Daniels travelled over 1,300 miles just between last Friday and Saturday alone, logging 57 minutes of playing time in both leagues combined.

Despite all the traveling, Daniels doesn't appear fatigued. In fact, he had the best NBA game of his young career on Wednesday night. With Rockets starters James Harden, Jeremy Lin and Chandler Parsons all sitting out until the playoffs, Daniels had the opportunity to step up, and he surely took full advantage of it. In 44 minutes, he drained 6-of-11 three-point attempts and tallied 22 points - all career-highs, as Houston fell to the Pelicans 105-100. 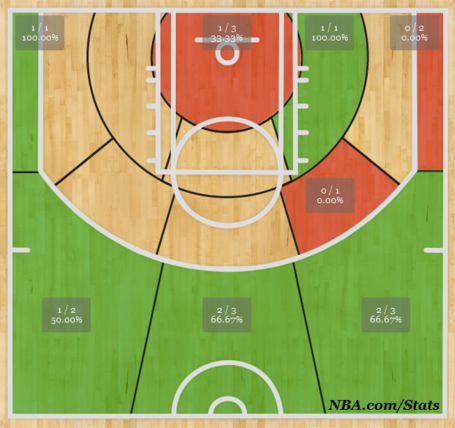 Though the Rockets lost, Daniels' performance did not go unnoticed. According to Adam Wexler of CSN Houston, Head Coach Kevin McHale is considering keeping Daniels on the roster for the playoffs:

"Despite Daniels inexperience, as he has now logged only 78 career minutes, McHale hinted after the game that there is a real chance Daniels has earned himself an opportunity to play more when the playoffs begin."

The ability to experience the NBA Playoffs and be part of the Rockets' roster would be an amazing time for Daniels, but he has the Vipers' playoff games to worry about as well. His D-League squad is just two games from reaching the Finals and he has been an integral part of the team all season long.

In 48 regular season games, Daniels averaged 21.5 points and 4.6 rebounds per game. He also set the D-League record with 240 three-pointers made in the season.