With the impending partnership between the Utah Jazz and Idaho Stampede, it looks like Kevin Murphy will be coming back to where his NBA career started.

On June 28th, 2012, Kevin Murphy's dream of being in the NBA came true as the Utah Jazz selected him with the 47th overall pick. His rookie year probably turn out exactly as he had hoped, as the guard only appeared in 17 games for the Jazz, averaging 3.1 minutes per game and totaling 15 points scored on the season. That year, he also played 14 games for the D-League's Reno Bighorns having more success putting up 13.2 points and 3.1 rebounds per contest.

In the 2013 offseason Murphy was part of the three-team deal involving Andre Iguodala. He was sent to the Golden State Warriors, but on July 24th, 2013, he was waived. So in a 13-month span Murphy's dream had come true and come to a crashing halt; quite the roller coaster ride.

The 2013/14 season was a season of redemption for Murphy and he has now put himself back on the NBA map. He played 34 games for the D-League's Idaho Stampede, averaging a league high 25.5 points per game to go along with 5.3 rebounds a night as well. Not only did he put up monstrous scoring numbers, but he did it quite efficiently shooting 48% from the field, 38.6 percent from 3-point range and 85.1 percent from the charity stripe. 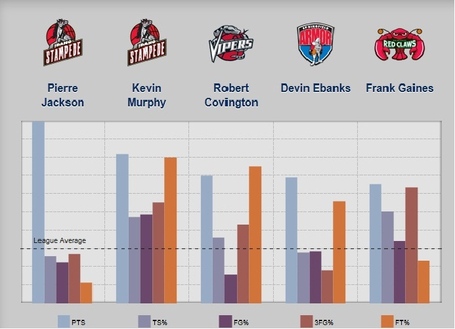 Just look how efficient Murphy was last year. Most of the talk was about Pierre Jackson (teammates with Murphy), but it should be noted that Murphy was the only player in the top-5 in scoring last year to be above the league average in all shooting categories -- and he was well above each one, as shown in the graphic.

Despite all of this, Murphy surprisingly never received a 10-day contract from an NBA team last season. His rights are not owned by any particular team, so any team can vie for his services at this point. Gino Pilato of D-League Digest has reported that though nothing has been officially announced, a deal is all but done between the Utah Jazz and Idaho Stampede for a single-team affiliation.

So, it would seem all has come full circle for Murphy. The team that drafted him will now be directly affiliated with his D-League team and while this certainly does not guarantee any future call-ups, it is definitely a benefit to have the team that originally drafted you watching your games much closer. The Jazz have a very young roster and could use someone with the scoring ability of Kevin Murphy. Anytime a team can find a shooting guard to spread the floor and also attack the basket, there is going to be room for him (Murphy finished ninth in the D-league in free throws made and attempted going 183/215 last season).

One thing is for sure: NBA teams are taking notice of Murphy and it won't be long before someone swoops in and offers him a spot on their roster. Kevin Murphy's dream came true and yet somehow he is still trying to achieve that very dream once again.