Danny Green is continuing to have playoff success, shooting the lights out against the Thunder and helping San Antonio move closer to the NBA Finals for the second consecutive season.

Spurs' guard (and NBA D-League alumni) Danny Green rose to national prominence in last year's NBA Finals, hitting 25 three-pointers through the first five games of their series against the Heat. Though he cooled down and San Antonio ultimately fell in seven games, Green's stroke did not vanish forever.

In the two contests versus the Thunder in this season's Western Conference Finals, the 26-year-old has recaptured his playoff magic. In both victories, Green has lit it up from beyond the arc to combine for eleven three-pointers. He is averaging 18.5 points during this span, to go along with a ridiculous three-point shooting percentage of 73.3 percent and 2.5 steals per game. 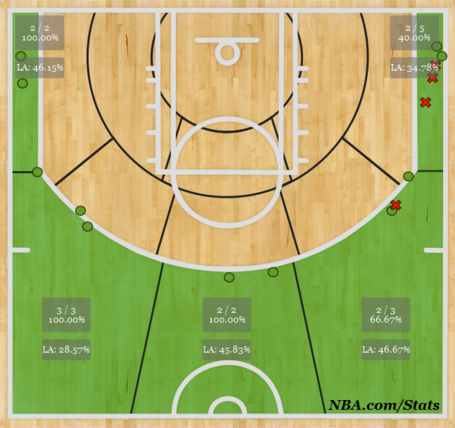 While he is certainly enjoying his deserved success now, it didn't always come that easy for Green. After an impressive college career at the University of North Carolina at Chapel Hill, the sharpshooter was selected in the second round of the 2009 NBA Draft and after one underwhelming season with the Cleveland Cavaliers, found himself released by the team.

Green was then signed by the Spurs in November of 2010, but was waived just six days later. Following this short stint, he found a temporary home with the Bighorns of the D-League, an environment in which he was able to flourish, prove his worth and regain confidence.

In Reno, Green averaged 20.5 points, shooting 48 percent from the field while grabbing down 7.5 rebounds in 16 games. He was recalled by the Spurs and after one final game as a member of the Austin Toros, appreciated what the D-League had done for him but was ready to take the next step in his career. The NBA.

As his shots continue to fall and wins keep piling up for the Spurs, Green may be on his way to becoming a household name come playoff time. In the Spurs' locker room, he already is.