Aron Baynes proved his worth in the NBA on Tuesday night, scoring a playoff career-high and helping the San Antonio Spurs cruise past the Portland Trail Blazers in Game 1 of the Western Conference Semifinals.

D-League players taking their game to the NBA and dazzling in the playoffs on basketball's biggest stage seems to be a growing trend this season. First, it was Troy Daniels who stole our hearts with his clutch three-pointers to help the Houston Rockets keep their first-round series with the Portland Trail Blazers close. Now, the torch has been passed to Aron Baynes.

The 27-year-old played in just his sixth-career NBA postseason game on Tuesday night, but surely made his 15 minutes of time on the court worthwhile. Baynes scored 10 points off the bench, shooting 5-of-7 from the field while grabbing down seven rebounds to help the Spurs thump the Blazers 116-92.

Baynes' shot-chart from the big game (yes, he likes the paint): 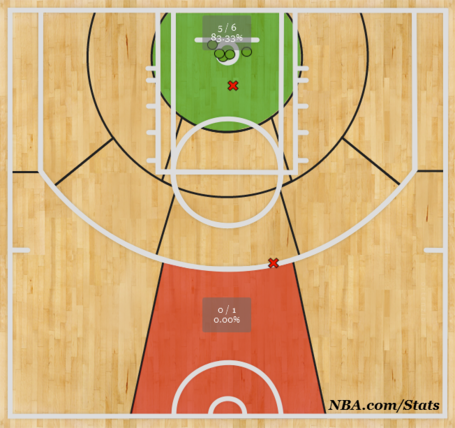 Aside from his time spent in San Antonio since entering the NBA in 2012, Baynes has been a member of the Austin Toros in the recent past. In a span of two seasons, the Australian-native averaged 15.1 points, 8.9 rebounds and 1.4 blocks in 9 contests. His D-League career-high came in his first-ever game, having dropping 30 points in a loss to the Bakersfield Jam on February 1, 2013.

While it has yet to be determined, whether or not, Baynes will continue to receive significant postseason minutes - this was just his second appearance in the playoffs this season - it was certainly nice to see a former D-Leaguer thrive on the NBA court.

Below are highlights from Baynes' career thus far, including his play overseas, in the D-League and in the NBA: