Is P.J. Hairston A Surefire First-Round Pick In The 2014 NBA Draft?

After 26 games with the Texas Legends, P.J. Hairston is eligible for the 2014 Draft. Questions is, has he done enough in those three months of the season to prove to NBA scouts that he is worth taking a chance on in the first round?

Share All sharing options for: Is P.J. Hairston A Surefire First-Round Pick In The 2014 NBA Draft?

After a tumultuous end to his college career, P.J. Hairston spent half of the 2013-2014 season in the D-League with the Texas Legends. In 26 games, the 6-foot-5 shooting guard averaged 21.8 points per contest on 45.8 percent shooting from the floor and 35.8 percent from three. He proved to be one of the best scorers in the entire league and with that, he's hoping to stamp a one-way ticket into the first-round of the upcoming NBA Draft.

However, there are still a few red flags, and concerns about his attitude remain. He isn't far removed from being dismissed by the University of North Carolina for accepting "too many extra benefits," and it has only been a little over a year since he was charged with speeding, marijuana possession and driving without a license. While he had no run-ins with the law during his brief stint with the Legends, one can't help but wonder if he was simply on his best behavior, walking on egg shells to help boost his draft stock.

With all that in mind, the question leading up to the draft will be whether or not Hairston did enough in the three months he spent with the Legends to convince scouts that he is worth taking a risk on in the first-round. Is he simply too talented of a player to pass up on, or do teams have a reason to be tentative?

Hairston has great size for a two-guard, measuring in at 6-foot-5 and 229 pounds with an 8.2 body fat index, per Draft Express. His strength was a big reason why he made the quick adjustment to the D-League and it will certainly help him in the NBA. He doesn't have a great first step, but he's a solid finisher in straight-line drives to the basket, and he excels in transition by leaking out and going strong to the rim.

However, Hairston struggles to finish around the basket (he only shot 57.96 percent at the rim this season, which was around the league average) and his lack of explosiveness certainly hampers his effectiveness. His wingspan helped him throw down some big dunks, but he's certainly not someone who will power his way over a defender.

Instead of reading the defense and exploiting whatever edge he is given, he often looks to draw a foul. Sometimes that works to his advantage -- he averaged 5.6 free throws per game this season -- but it often worked to his disadvantage -- he has a tendency to barrel his way into tough positions or throw up difficult shots when he gets up in the air. To add to that, he's not very quick, which allows defenders time to recover or slide over for help.

Another issue is that Hairston doesn't have a great handle. When defenders cut off a lane to the basket and forced him to make a move, he struggled to make his way to the basket. And seeing that he had little-to-no mid-range game (he only attempted 36 jumpers in-between the paint and three-point line) good defenders had success against him by sticking to his hip, limiting his open looks from beyond the arc and forcing him to put the ball on the floor.

Note: These weaknesses may not be as visible right away because Hairston was the Legends' number one option and defenses were, therefore, focused entirely on him. At least for his first few years in the NBA, he'll be asked to fulfil a certain role, which will likely be to shoot threes and play sound defense. The rest will come, eventually. And in saying all of that, he still averaged 21.8 points per game on 45.8 percent shooting.

Many rookies struggle out of the gates when adjusting to the NBA's extended three-point line but Hairston won't have an issue. A shade over half of his shot-attempts this season with the Legends came from three-point range, and in 26 games he knocked down 73 out of 204 attempts from beyond the arc (35.8 percent).

While his three-point percentage would've, ideally, been higher, there's a good reason why it wasn't (shot selection). Nevertheless, Hairston's advanced stats help paint his shooting ability in a better picture. With the Legends, his True Shooting Percentage (which takes into account free throws and three-pointers) was 60.4 and his Effective Field Goal Percentage (which takes into account that a three is worth more than a two) was 53.4.

Note: Just for comparison's sake, Stephen Curry's TS% this season was 61.0 and his EFG% was 56.3. That's not to say Hairston is a Curry in the making because, obviously, the NBA is a different kettle of fish. It's just to prove that he is, and has the potential to be even more of, a lethal shooter.

At the end of the day, it's Hairston's ability to stretch the floor that has scouts attracted to him because it's his most translatable skill. He has a very quick and smooth release, and his versatility as a shooter makes him an exciting prospect. Defenses have to hone in on him on the fastbreak, he can spot-up with range and he is capable of shooting off of screens; all signs that he'll be a good shooter in the NBA.

Hairston is also a tough shot taker, tough shot maker. He's capable of creating his own shot off the dribble, and when hits a couple of shots in a row, his confidence soars. In an up-and-down, shot-happy system, he'd be right in his element.

About that confidence, though: It can work to a player's advantage, but it can also work to their disadvantage.

Although Hairston made 73 threes as a Legend, he attempted 8.7 per 36 minutes, many of which were forced. Because he isn't great at putting the ball on the floor at this stage of his career, he'd tend to float around the perimeter in half-court sets, and when he did get the ball, odds were that a shot was going up. (He only averaged 0.8 assists per game, the fourth lowest amongst guards in the D-League, and he had a Usage Percentage of 25.1. That's not a good combination, at all). He'd often pull-up from way too far out, launch a contested jumper fresh into a new shot clock or force a shot instead of dishing it to a more open teammate, as shown below. 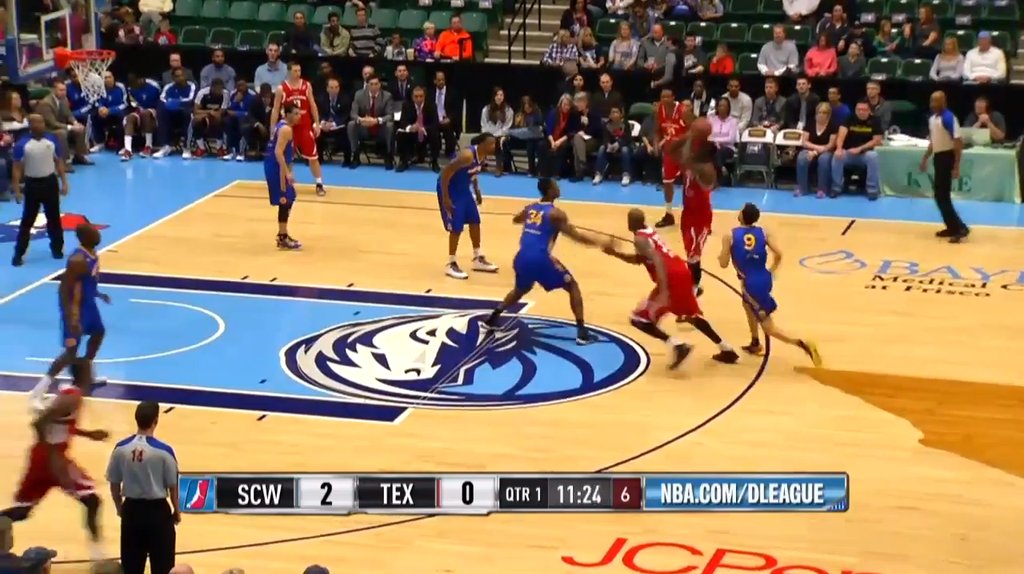 Finally, while Hairston's mechanics are, for the most part, smooth, he has a tendency to rotate his waist in the middle of his shooting motion. Although that helps straighten up his arm to the basket, it occasionally rotates his shoulders, too, which throws off his shot.

Hairston has the tools to be a great defender. His 6-foot-9 wingspan helps him play the passing lanes (he averaged 1.5 steals in 32.3 minutes per game) and his already strong body will help him out of the gates when guarding opposing two-guards. While he only averaged 0.4 blocks per game, he's capable of making plays at the rim, which is just another tick in the box.

The issue with Hairston is effort, and when he's not dialled in defensively, he's a big liability. He wavers through sets and falls asleep when he's not guarding the ball. As you'll see in the video below, which highlights missed coverages in a game against the Santa Cruz Warriors early in the season, Hairston is sometimes slow to react by failing to slide over to cut off open lanes, standing up straight instead of getting down low in a defensive stance or trying to anticipate a steal instead of sticking to his man. It forces him out of position and puts a lot of pressure on the team's back line of defense.

The biggest concern about Hairston is, and has always been, his attitude. When he's locked in, he's a prototypical 3-and-D player, capable of stretching the floor in a variety of ways while using his length on the other end to pester players on the perimeter.

However, when he's not dialled in, he's somewhat of a liability.

After a blazing hot start, in which he scored 40-plus points twice within his first 11 days with the team, Hairston was a mess in the month of February, averaging an underwhelming 18.4 points per game on 39.4 percent shooting with the Legends crawling to a 1-10 record. He found his rhythm again in March and finished the season with a bang, but the same concern remains -- his attitude. To add to that, Chad Ford (ESPN Insider subscription required) said that Hairston did himself no favors in the combine thanks to his lethargic approach to drills. For someone who had (and still has) a lot to prove since parting ways with UNC, it's worrying that he wasn't more professional with his approach.

Nevertheless, at just 21 years of age, Hairston has proven to be a great shooter, and while some of his skills still aren't up to scratch (namely his handles) he's got the potential to develop into a nice spark plug off the bench. However, where he winds up will be what sets him up for a long, fruitful career. Veteran-orientated teams in the back-end of the first-round, like the Chicago Bulls, Oklahoma City Thunder, Miami Heat and L.A. Clippers, should take a chance on him if given the opportunity. But even with that in mind, it wouldn't be surprising to see a younger team snatch him up a little earlier if they're looking for a proven shooting guard.

Hairston is one of the more NBA-ready prospects in the draft, and under the right tutelage, he could find his feet pretty quickly.