Is Isaiah Canaan Ready To Be The Houston Rockets' Backup Point Guard?

With Jeremy Lin no longer with the Houston Rockets, Isaiah Canaan will be thrusted into the backup point guard role next season. Yet after spending half of his rookie campaign with the Rio Grande Valley Vipers, is he ready to be the shooter and facilitator the Rockets are looking for?

Share All sharing options for: Is Isaiah Canaan Ready To Be The Houston Rockets' Backup Point Guard?

The Houston Rockets drafted Isaiah Canaan out of Murray State last summer with the 34th overall pick, and after spending a large chunk of his rookie campaign in the D-League with the team's affiliate, Rio Grande Valley Vipers, Canaan is left with a tall task this upcoming season.

With adding another star in mind, the Rockets cleared space off of their books this offseason by trading Omer Asik and Jeremy Lin away for, essentially, nothing in return. While the team didn't get the big name they were looking for, the trades, as well as Chandler Parsons' departure, cleared a lot of space for other players to fill. The Rockets signed Trevor Ariza to a four-year deal to replace some of that production, but they'll be looking at their existing roster to pick up the rest of the slack. And that's where Canaan comes into the picture.

Now that Lin is no longer the Rockets' backup point guard, Canaan, only in his second year, will be given the keys to drive the second unit. Yet seeing as he only played a total of 252 minutes in the NBA last season, it remains to be seen whether or not he is ready to make the jump the Rockets are hoping he can.

However, based on the body of work he displayed in the D-League, his skills should be a perfect fit in the Rockets' system.

Much like Robert Covington and Troy Daniels, Canaan thrived in the Vipers' up-and-down, 3-point happy system last season. In 18 games, he averaged 21.8 points, with a large chunk of his damage coming from beyond the arc, where he shot 36.9 percent. He attempted 8.7 threes per game and connected on 3.2 of those on average.

Canaan's shooting ability is the biggest asset he brings to the table and it fits a big need for the team. Jeremy Lin's stint in Houston wasn't as successful as expected, mainly because with James Harden and Chandler Parsons on the team they needed floor spacers more than they needed people who could break defenses down. With Canaan, he's capable of doing both (one much better than the other), yet his bread and butter is his ability to knock down outside shots. He even displayed that in the 22 games he appeared in with the Rockets last season, with 55 of his 87 total shot attempts coming three.

What makes Canaan an intriguing prospect is that he can get his shot off in a variety of ways, and quickly at that. He's comfortable pulling up on pick-and-rolls and on the fastbreak and creating his own shot off the dribble (65 percent of the threes he hit as a Viper were unassisted). While very few of his attempts came off of plays or on spot-ups, he's showcased the ability to knock down threes in those situations at a high rate in college, which be a nice compliment to Harden's strengths.

Note: Canaan averaged 1.37 points per possessions off of screens at Murray State, per Draft Express.

Canaan is tough shot taker, tough shot maker, too. He's tough to slow down once he heats up because his confidence soars through the roof; something he displayed in the four playoff games he appeared in with the Vipers with averages of 34.5 points on 43.6 percent shooting from downtown.

Canaan's shooting percentage would've been much higher, though, had his shot selection been better. A lot of that was a product of the Vipers' system -- they valued threes a lot more than any other shot -- but he still settled for far too many tough shots. Take the image below as an example: 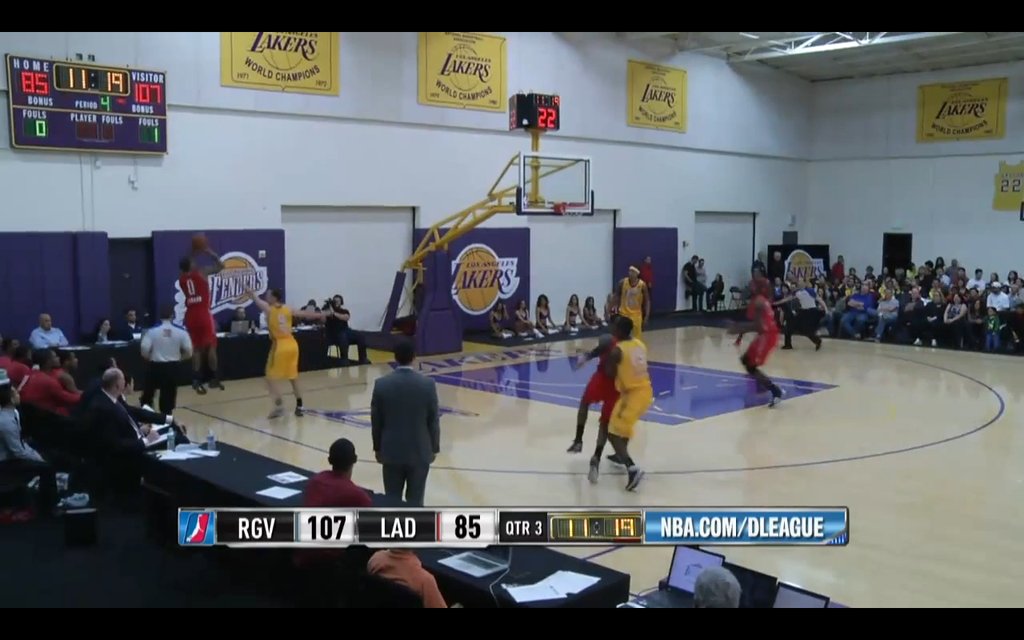 Canaan had just picked off an errant pass and chased it down, leading to him standing at the corner three on a fastbreak with his dribble alive. While he, himself, might not have had an easy look at the basket, the Vipers were faced with a 4-on-3 opportunity, meaning someone was open. Instead of settling for a contested three with 22 seconds left on the shot clock -- as he did -- Canaan could've hit a cutting Troy Daniels, the center filling the middle of the paint or skipped the ball over to the shooter in the other corner. More than likely, the Vipers could've had a shot at the rim or a more open three had Canaan passed it up.

That's not the only example of Canaan settling for a tough shot. With the Vipers, he attempted far too many pull-up threes on the fastbreak and shots with defenders draped all over him. Some of that should be solved by simply playing with the Rockets. His usage percentage will be much lower playing alongside the likes of Harden, Ariza and Howard, so he wont have as many opportunities, nor freedom, to take those types of shots.

Canaan is a crafty player. He's at his best in pick-and-rolls, and because of his ability to hit threes defenders have to close out on him, thereby opening up lanes to the rim.

Canaan has a great handle of the ball, he's quick and he does a good job of changing speeds to freeze defenders en route to the basket. He stays low to the ground with his dribble, making it hard to defenders to pick his pocket. Although he lacks the ideal size for a point guard at 6-feet, he has a strong upper body, which helps him compensate for his height when finishing around the rim. He does a good job of creating contact and knows how to get his defender off balance and up in the air to pick up fouls -- he averaged 6.2  free throw attempts per 36 minutes and converted them at a high rate (81.1 percent). He also plays under control, rarely forcing plays or overcomplicating matters.

However, attacking the basket is where his size becomes a big issue. Canaan is smaller than the average NBA point guard at 6-foot and he lacks explosiveness to finish over length. As a result, he struggles to convert shots at the rim, especially when it's being patrolled by a big -- Canaan only shot 45.5 percent on layups as a Viper, well below the league average.

The root of the problem is that Canaan relies heavily on creating space to get his shot off. Instead of just going up strong with the ball, he jumps into the body of his defender to avoid getting his shot blocked. However, not only does that impact his ability to jump as high as possible, it throws his body off balance and makes it hard to control the ball. Big men soon learnt to simply keep their hands up when Canaan drove to the basket and guards took his ability to use his their body as leverage away by stepping aside.

Canaan also has a tendency to jump off his left foot, instead of his right, when going up for a left-hand layup. It isn't as big of an issue (and more importantly, it should be easy to correct), but it sometimes causes him to miss easy shots.

One of the biggest knocks on Canaan coming out of college was his passing ability. In a nutshell: an undersized, scoring point guard with low assist numbers raised a few red flags. Nevertheless, he showed signs of improvement in that area of his game with the Vipers with averages of 8.2 assists and 3.0 turnovers per game.

Part of the reason for the influx in numbers was due to the pace in which the Vipers played. They took shots quickly, which parlayed into more shot attempts through a 48 minute game. Nevertheless, Canaan did a good job of commanding the offense by pushing the ball on the fastbreak, finding open shooters on the wing and kicking it out when the defense collapsed. In the 18 games he appeared in, he dished out 10 or more assists on six occasions and recorded a season-high 15 assists against the Bakersfield Jam.

However, there are still some areas that Canaan struggles with when it comes to setting up his teammates, namely: he gets caught in the air far too often, which forces him to make a tough pass that usually ends up either out of bounds or in the hands of the opposition. Canaan also had issues passing out of the pick-and-roll when bigs came out to double him.

Canaan has his ups-and-downs on the defensive end. His height is a glaring issue, but he makes up for some of that with his near-6-foot-5 wingspan. He has good instincts and although he gambles too often in the passing lanes, his long arms help him when picking off passes or getting a hand on the ball.

His main issue, however, is the effort -- or lack thereof -- he gives defensively. Canaan often falls asleep, gets caught ball watching, or gives up once his man has beaten him off the dribble. A lot of that could simply be a result of him not having the energy to engage himself on both ends of the court because Canaan has been the centerpiece offensively since he stepped foot on Murray State. He has shown the potential to lock someone up -- he has the foot speed and quickness to do it -- and perhaps in a more reduced role, like the one he will have in Houston, Canaan will give more defensively.

Canaan is a tough player. He plays with a lot of energy on the offensive end of the court and he has a knack for scoring. His 3-point shooting will be a much welcomed asset in Houston and it allows him to play off the ball; something Jeremy Lin couldn't provide.

For those reasons alone, Canaan should fit in nicely as the backup point guard. He has already shown that he can thrive in their system -- albeit on a smaller, more extreme stage in Rio Grande Valley-- and his versatility offensively will give him plenty of opportunities, especially if he shows improvements on the defensive end of the floor. He's not afraid of the big stage and he seems ready to embrace a bigger role.

All statistics gathered from the D-League's official site and Draft Express.